Sometimes we only learn about news a bit late. On 8 May of this year, the Museum of Fine Arts (MFA) unveiled one of its grandest spaces, the new Dutch and Flemish gallery, which opened to the public after a nearly year-long renovation.

The transformed Art of the Netherlands in the 17th Century Gallery features seven paintings by Rembrandt Harmensz. van Rijn. These are among approximately 30 paintings in the gallery illustrating the full range of art production in the Netherlands. Included are fine landscapes, still lifes, genre scenes, portraits, and religious histories by acclaimed artists, such as Peter Paul Rubens, Anthony van Dyck, Jan Steen, and Jacob van Ruisdael. Ca nvases of varying size, including monumental paintings, are installed on damask-covered walls, while smaller works by Rembrandt, his students, and associates are displayed in cases. Complementing the paintings in the gallery are decorative art objects, including Dutch furniture, Delft pottery, and silver. The renovation of the Art of the Netherlands in the 17th Century Gallery was made possible by Rose-Marie and Eijk van Otterloo.

Also reopened is a companion gallery, the Leo and Phyllis Beranek Gallery, where approximately 20 works are displayed. In addition to showcasing Dutch and Flemish art from the Museum’s holdings, both galleries highlight loans from important collections, including 18 works lent by the Van Otterloos, continuing the Museum’s long-standing relationship with these noted supporters. The MFA also has opened the Alan and Simone Hartman Galleries featuring two 18th-century period rooms from Great Britain—Newland House Drawing Room and Hamilton Palace Dining Room—as well as a gallery for British Art 1560–1830. 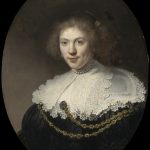 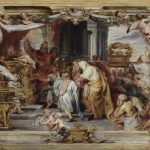