Amsterdam Museum (formerly Amsterdam Historic Museum) has opened a new department: Amsterdam DNA. As a three-dimensional travel guide, this presentation takes you on a 45-minute historical tour of Amsterdam. Carefully selected highlights, including new exhibits and loan items, tell the interesting story of this multifaceted city in seven chapters. In each chapter, one exhibit forms the basis for the story of that period. These stories are told through exciting animations which are projected onto big glass screens in the middle of the gallery. Every visitor is given a travel guide which can activate the animations of each period in one of the ten languages offered, from Italian to Russian and Japanese. Amsterdam DNA has been co-facilitated with support from the BankGiro Loterij, the Dutch cultural lottery.

Amsterdam DNA is an important step in the repositioning of the Amsterdam Museum. The museum wants to serve Dutch and international tourists better and strengthen its bond with local residents. The idea for Amsterdam DNA thus emerged from the finding that although tourists apparently like to know the story of the city, they don’t have time to spend hours wandering around the museum. Amsterdam DNA is therefore intended as an introduction, an attractive way of getting to know the city and its residents, in 45 minutes.

The features of the typical Amsterdam DNA constitute the main theme in the presentation: enterprise, free thinking, creativity and citizenship. During historical peaks – such as the Golden Age and the 1970s – these characteristics experienced their heyday. In contrast, during “pivotal moments” – such as the time of the French occupation and the Second World War – they came under great pressure. You can discover which of the four characteristics of the Amsterdam DNA attracts you most through the interactive game element that has been incorporated in the new exhibition.

At the end of the presentation, the results of the game reveal which characteristic you prefer and which city walk would interest you most. Specially to mark the launch of Amsterdam DNA, four walks through the city have been created for the mobile phone. This MuseumApp guides you through Amsterdam, past places linked to enterprise, free thinking, creativity or citizenship.

The story of Amsterdam in brief

Amsterdam DNA starts with a multimedia presentation in which the city’s past and present merge into each other. This is followed by the chronological story around the year 1000. On a strategic intersection of rivers, a small settlement became a city of world renown, built on piles. The “Alteration” in the year 1578, when the Catholic city government was deposed and Amsterdam became a Protestant city, then ushered in the “Golden” 17th century. During this century, enterprise progressed in leaps and bounds, particularly thanks to overseas trade.

Attracted by the flourishing economy and its liberal climate, immigrants from all over the world descended on the city. This resulted in one of the most spectacular city expansions in international architectural history: the “canal belt’. It is also the time that art experienced a golden age with painters who achieved world fame and top quality sculptors and gold and silversmiths. In this century too, many rich citizens started to show concern for their less fortunate fellow citizens and many institutes were set up to care for the poor, ill and orphans. These wealthy citizens looked after the financing and management themselves.

Amsterdam DNA continues with the highs and lows of the 18th, 19th and 20th centuries: the economic downturn under French rule, the resurgence from the end of the 19th century, the horrendous loss of 60,000 Jewish residents of Amsterdam in the Second World War, and the “free city” in the rebellious 1960s. Amsterdam acquired the reputation of being a city where anything is possible and home to the famous Dutch tolerance. It was the first city in the world to allow gay marriages. Since the murder of Theo van Gogh (2004) and the tightened regulations of recent years, Amsterdam has started to lose its free reputation. But one thing remains: with 178 different nationalities, Amsterdam is the most multicultural city in the world. This brings you back to the start of the tour, the present day. Here you can see the results of the game which reveal which characteristics of the Amsterdam DNA most appeal to you. If you would like to know more, you can then visit the other galleries in the museum which tell many more stories about the city, or you can go on one of the city walks which are available via the MuseumApp on the mobile phone. 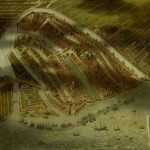