On Monday, 21 May the “Raad voor Cultuur” (Dutch Arts Council), the body that advises the state secretary for culture on national cultural policy, published its recommendations for the period 2013–2016.

The “Raad” described the RKD (Netherlands Institute for Art History) as “a scholarly center of excellence that functions well” and therefore advised the state secretary to grant it the full amount of the funding it had requested. The same applies to CODART, which the ministry funds through the RKD. The Council had the following to say about the collaboration between CODART and the RKD: “The RKD plays a significant role within the network of Dutch art-historical scholarship, and its cooperation in this context with the international network of curators of Dutch and Flemish art (the CODART Foundation), which is partly financed by the RKD, is important.”

CODART is happy and proud that the efforts of the RKD and CODART have been recognized by the “Raad voor Cultuur.” The substantial cutbacks imposed by the Ministry mean that many cultural institutions will be receiving less funding than they had requested, and some will even disappear altogether. We are shocked at the fact that such important museums as the Rijksmuseum in Amsterdam, the Mauritshuis in The Hague, and the Rijksmuseum Twenthe will be faced with large cutbacks in the coming years. We hope that further talks between these museums and the state secretary will lead to other agreements. The state secretary will announce his final plans on the third Tuesday of September – Princes’ Day – the day of the speech from the throne.

Reactions to the recommendations to the state secretary can be read on the websites of the various museums. The advice to the government can be read in its entirety (in Dutch) here. 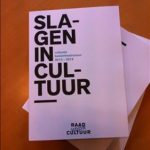