The Broelmuseum announces that it has bought a painting by Jacob Savery (ca. 1565-1603). The work, signed IS and dated 1585. The small parchment (12 x 22 cm.) enriches the museum’s collection with an early work by the artist. It already owned a late work from 1603.

The painting, a View of a city with a bridge is very comparable to Landscape with the story of the daughter of Jephthah in the Rijksmuseum Amsterdam and Landscape with a city on a bay in the Staatliche Sammlungen in Dresden. Comparison of the three works gives much insight in the way Savery was looking for a new way to depict landscapes.

The Broelmuseum also acquired two engravings after designs by Jacob Savery. The first, Large landscape with John the Baptist was made by Nicolaes De Bruyn (1571-1656) and published by Fransoys van Beusekom in Amsterdam. The second, the Convenant between David and Jonathan is part of a series of bible illustrations published by Claes Jansz Visscher (1586-1652).

Kortrijk and Savery have a special relationship. Roelandt and Jacob, who became the two most famous artists from the Savery family, only lived in Kortrijk during their childhood. They are, however, very much appreciated here. The Broelmuseum has one of the richest collections of works by Roelandt Savery in the world. The publication may be viewed as an addition of the catalogue of the exhibition Roelandt Savery (1576-1639) held in 2011 in Prague and Kortrijk. 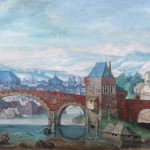 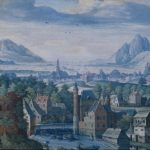