From 1 September, 2013, the art historian Dr. Bernd Ebert (1972) will be taking over the direction of the collection of Dutch and German painting from the second half of the 16th century to the end of the 18th century at the Alte Pinakothek.

Bernd Ebert studied art history, law and business studies at Rheinische Friedrich-Wilhelms-Universität in Bonn and gained a doctorate in 2005 with a monograph and annotated catalogue raisonné on the artists and brothers Simon (1610–61) and Isaack Luttichuys (1616–73). He has extensive experience from working in museums, galleries and private collections, including the Metropolitan Museum of Art in New York and the South African National Gallery in Cape Town. As a Research Fellow Trainee at the Staatliche Museen zu Berlin he curated the exhibition “Kreis Kugel Kosmos” at the Pergamonmuseum, coordinated the Berlin stage of the exhibition “Albrecht Dürer: Zwei Schwestern” in the Gemäldegalerie and took on the organisation of the international symposium “Rembrandt – Wissenschaft auf der Suche”. In 2011, he was Guest Scholar at the renowned Getty Research Institute in Los Angeles.

Bernd Ebert is currently Academic Assistant to the Director General of the Staatlichen Museen zu Berlin. He was, among other things, project coordinator for the exhibition “The Art of the Enlightenment”, staged in conjuction with the Bayerische Staatsgemäldesammlungen, the Staatliche Museen zu Berlin and the Staatliche Kunstsammlungen Dresden at the National Museum of China in Beijing (2011/12).

The Bayerische Staatsgemäldesammlungen are pleased to have been able to gain such a distinguished academic to be the Curator of Dutch and German Baroque painting at the Alte Pinakothek. 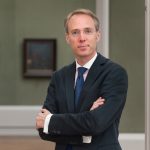