Information from the library, 6 April 2014

An exquisite illuminated play text from the fifteenth century, has been acquired for the nation and allocated to the British Library by HM Government in lieu of Inheritance Tax under the Acceptance in Lieu (AIL) Scheme which is administered by Arts Council England on behalf of the Department for Culture Media and Sport. The acquisition was supported by generous grants from the Art Fund, the Friends of the British Library, International Partners in memory of Melvin R. Seiden and from the Breslauer Bequest, as well as donations from other anonymous donors.

The manuscript was commissioned in around 1465 by Philip the Good, Duke of Burgundy (1396-1467), who was one of the greatest book collectors and art patrons of his time. It contains the only surviving complete text for the play, the Mystère de la Vengeance, by Eustache Marcadé. The play, written in French, was intended for performance over four days and was a development of the traditional Christian ‘Mystery’ play. Duke Philip may have attended one of the performances in Burgundy in 1463 and this manuscript might be a luxurious and extravagant record of that event. The manuscript which is in exceptionally fine condition contains 20 superb large miniatures by Loyset Liédet.

Since its creation it has passed through the libraries of some of the greatest book collectors, and when sold in 1812 from the collection of the Duke of Roxburghe it was the most expensive illuminated manuscript ever sold in England, more than doubling the previous record. For the last two hundred years it has been part of the Devonshire Collection at Chatsworth in Derbyshire.

The Mystère de la Vengeance is the finest surviving illuminated manuscript of any medieval drama and is of particular importance both for the study of the theatre in the 15th century, for which few documents survive, and for the beauty of its illuminations, which are as fresh today as on the day they were painted over 500 years ago.

Edward Harley, Chairman of the Acceptance in Lieu panel said: “I am thrilled that thanks to the Acceptance in Lieu scheme, The Mystère de la Vengeance is joining the British Library’s incomparable collection of illuminated manuscripts. Having been at Chatsworth for the past two hundred years, it will now be available to new audiences who either visit the British Library or access the manuscript through the Library’s Manuscripts website – which demonstrates the importance of the scheme.”

Dr Scot McKendrick, Head of History and Classics, British Library said: “I am delighted that this very significant manuscript has been allocated by HM Government to the British Library. As a unique illustrated play made for one of the most important artistic patrons of fifteenth-century Europe, it is an appropriately world-class addition to the Library’s collections. I am sure that its acquisition for the nation will inspire and delight researchers and the general public, especially through the complete, free digital coverage of the manuscript on our Digitised Manuscripts website. This tremendously important addition to the national collection was made possible thanks to the Acceptance in Lieu of Tax scheme and to the generosity of our funders: The Art Fund, the Friends of the British Library, International Partners in memory of Melvin R. Seiden, the Breslauer Bequest, and other anonymous donors.”

Dr Stephen Deuchar, Director of the Art Fund, said: “This important manuscript – with its exceptional iconography – is a striking addition to the British Library’s rich collection. We are thrilled to be supporting its acquisition.”

The British Library holds one of the world’s finest collections of illuminated manuscripts including several other volumes that were once in Philip the Good’s collection. From Saturday 8 March, both volumes of the Mystère de la Vengeance will be on display in the Library’s newly refurbished Sir John Ritblat Gallery and available online on our Digitised Manuscripts website http://www.bl.uk/manuscripts/. 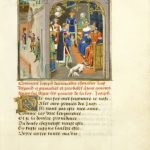