A contribution by Zoltán Kovács 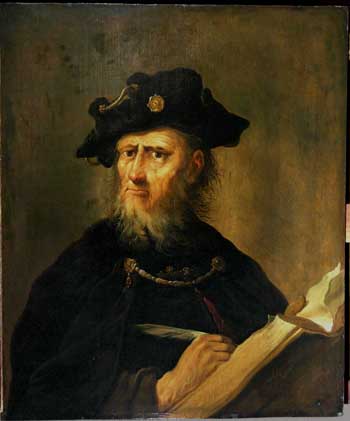 In the past few years the Budapest Museum of Fine Arts could enrich its collection only in a small way. This moderation was not due to that in Hungary there would not have been any remarkable art works to acquire for our collection, but so much the more to the fact that the museum had to exist among very modest financial circumstances. Therefore it was an especially happy event that we could acquire a splendid work of the Amsterdam master, Pieter Quast from a Budapest private collection in June 2007. The animated story of the painting speaks for itself, and gives a true description of the actual state of art works in private hands in Hungary. Although lots of the European old master paintings belonging to important collectors were registered by the Budapest Museum of Fine Arts from the 1950s onwards, it is still possible to come upon first-rate works of art which remain in unknown or hidden collections.

Working on an essay of Quast’s works in Hungary, some years ago I found a noteworthy painting by the master in an old auction catalogue from the 1930s. The catalogue entry was fairly tight-lipped about the picture: „Pieter Quast: Writing Man, oil, 71 x ”, but even by reason of the small and poor black and white illustration it seemed to be extremely interesting. In a short time it turned out that the painting had appeared on several occasions in the 1930s at the sales of the Royal Hungarian Savings Bank, and originally belonged to the Budapest collection of Count Jenő Karátsonyi. First pieces of the Karátsonyi-collection were acquired by Lázár Karátsonyi yet in the 18th century, but its name into repute was brought in the 19th century by Count Guido Karátsonyi, a genuine and infatuated collector. Having been well-connected in Paris and Italy, his collection included above all first rate Italian and French old masters paintings, but the Netherlandish school was also represented by quite a few masterpieces. By the end of the 19th century, when Jenő Karátsonyi inherited the family collection, it developed into one of the richest and most representative collections in Budapest. Its importance was well demonstrated by the visit of Emperor Francis Joseph I in 1898, when a splendid exhibition was organized from the painting collection in the Karátsonyi Palace, and a catalogue was also published upon this particular occasion. 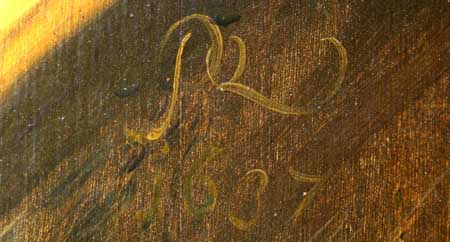 Quast’s Writing Man first appeared among the exhibited works. The catalogue, as well as that ones of the sales in the 1930s displayed the painting as signed, nevertheless, none provided the support and the correct signature. The work emerged at last in 1939, when the rest of the two years earlier auctioned entire Karátsonyi-collection was sold up. Following that sale the painting disappeared, and despite all my efforts I have not managed to find traces of it for years. The story of the picture took a turn for the better in December of last year, when an aged art collector called on the museum to help him to identify some interesting but unknown pieces of his collection. It was December 6, Santa Claus’Day (!), when we visited him, an open minded, high cultured man with a wide intellectual horizon having been living among neatly selected art works since his childhood. While having look at his more than fifty paintings, to my great surprise Quast’s Writing Man hung there on the wall in an adjoining room. The aged collector was the man who bought it at the sale of the Royal Hungarian Savings Bank in 1939. From that time the painting appears never to have left its position, remaining until now in the hands of the eager collector, namely where it survived many dramatic events of the 20th century, including World War II, and the revolution in 1956.

Even on a first examination, it was obvious that the work had high artistic value. Its surface was on the whole in good condition due to the careful custody of the owner. Old retouches were apparent in places, mainly in the background, with some abrasions at the edges of the panel, and the whole surface showed a moderate craquelure.

The Old Masters’Gallery at the Budapest museum holds two works of Quast: the Music Making Company dated to the early 1630s and a small-size panel portraying an elderly, bearded man in a hat, bearing the date 1639. The new acquisition panel presents a sixty to seventy years old man against a neutral background, seen to just above the waist, regarding the viewer with knitted eyebrows and a severe countenance, while he writes with a pen in the massive, open book held in his left hand. His facial type, bushy beard, and locks of hair emerging from under his large hat are definitively reminiscent of the elderly male figure depicted in the small panel at the museum. The possibility cannot be excluded either that the two pictures portray exactly the same model, with a difference of a few years. The oak panel bears not only the master’s monogram, but also the date 1637. The Writing Man was painted three years after Quast joined the Saint Luke’s Guild in The Hague. Despite its larger size the work probably belongs to that very loose category of paintings and etchings of half-figures, so popular in the 17th century, for which the term tronies has been reserved. Tronies were not regarded as portraits, even though models might have been employed in their production. It was rather their dress and their age and attitude that lent to these figures their particular significance. They were prefereably intended as studies for a character type or a head of interesting physiognomy, which could be later used later within a larger composition. The tronie offered an excellent opportunity for the painter, as opposed to the portrait, to demonstrate his abilities freely. Perhaps this would explain how significant demand developed in the 17th century for these popular studies.

Quast is known to have painted several tronies. In listing the works of Quast in 1902, Abraham Bredius mentions a signed painting, which was formerly in the Fürstenberg collection, and appeared at a Dusseldorf exhibition in 1886. On the basis of his description, this work must have been extremely similar to the Budapest painting, likewise portraying a man wearing a large hat and cloak. The Budapest Writing Man’s most striking virtues are its fresh, dynamic brushwork, the palette masterfully built up from warm light ochre-brown tones, and the masterly placed highlights, accentuating the detail forms of the man’s face. The painting’s technical, stylistic and qualitative characteristics lead to the conviction that it is about one of the master’s chefs d’oeuvres. Its purchasing by the Museum of Fine Arts followed after prolonged negotiations with the owner, Mr. Béla Erődi-Harrach, who in recognition of the especial importance of the painting to the museums’ Dutch collection eventually agreed to its sale.

The Writing Man, together with other paintings by Quast in Hungarian collections, both past and present, has been recently published („The Witty Pieter Quast”. The Works of an Amsterdam Master in Hungary Then and Now, Bulletin du Musée des Beaux-Arts 104 (2006), pp. 101-28.).