JHNA (ISSN – 1949-9833) is the open-access electronic journal of Historians of Netherlandish Art. Founded in 2009, the journal publishes issues of peer-reviewed articles two times per year. These articles focus on art produced in the Netherlands (north and south) during the early modern period (c. 1400-c.1750), and in other countries and later periods as they relate to Netherlandish art. This includes studies of painting, sculpture, graphic arts, tapestry, architecture, and decoration, from the perspectives of art history, art conservation, technical studies, museum studies, historiography, and collecting history. www.jhna.org

We invite scholars to send an abstract before January 1th, 2014 to S.P.M.Bussels@hum.leidenuniv.nl. This abstract will be discussed by the guest editors and the board of the Journal of Historians of Netherlandish Art. Remarks and comments will be send to the authors at the beginning of February 2014. Then the participants are asked to send us an advanced draft before October 15th, 2014. This will be distributed among all other contributors. During a workshop in December 2014 the contributors are asked to present their own contribution and comment upon the other contributions. A revised version needs to be submitted by June 1st, 2015. The guest editors, the board, and anonymous reviewers will give their comments and remarks. A final version needs to be submitted by December 1st, 2015. Whereupon the guest editors, the board and reviewers give their final approval. The special issue of the JHNA will be published in 2016.

The Sublime in Seventeenth-Century Dutch Art, Architecture and Theater

In Rembrandt’s Eyes (1999) Simon Schama sees Rembrandt’s ‘astounding capacity for transforming the ordinary into the sublime’ as quintessential for safeguarding the painter from a mediocre career as a Rubens imitator. Nevertheless, Schama does not clarify what he actually means with the sublime. Scholarly use of the sublime in the context of seventeenth-century Dutch art is often problematic. Later definitions by Burke or Kant are used or, by contrast, any influence of the sublime is denied because the Burkean or Kantian concepts were not present yet.

However, some art historians succeed in defining the sublime as a rising concept in seventeenth-century art. Louis Marin and Clelia Nau start from the appropriation of (ps.-)Longinus’ treatise on the sublime, Peri hupsous, in early modern poetics and fruitfully connect it with the work of Poussin and Claude Lorrain. Similarly, for this special issue of JHNA we want to re-evaluate the role of the antique concept of the sublime for our understanding of Dutch seventeenth-century painting, print, sculpture, architecture, poetry and theatre. We will relate the rise of the sublime with a rich diversity of artistic endeavors to raise wonder, dismay and/or bewilderment by representing explicit cruelty or, by contrast, grandeur.

The appropriation of Peri hupsous can clearly be found in seventeenth-century Dutch poetics starting from De constitutione tragoediae (1611) of Daniel Heinsius. There, the antique concept of the sublime is used to discuss the role of the artist combining talent and skill to achieve an overwhelming effect on the beholder. By doing so, the Republic was groundbreaking. Put in an international perspective, Dutch poetics influenced among others the German poet Opitz and English poets as Jonson, Milton, and Dryden. Moreover, French drama theory (e.g. Chapelain) and practice (e.g. Corneille) heavily rely on Dutch poetics.

In its turn, Franciscus Junius’ De pictura veterum (1637) used the antique concept of the sublime for the first time in an art theory and influenced a wide range of discourses on the visual arts throughout the whole of Europe. The appropriation of Longinus’ theory led to new ideas on the role of the visual artist and his attempts to overwhelm the onlooker. Rubens’ and Van Dyck’s enthusiastic responses to Junius’ art theory are well known, but Junius was also read in Dutch seventeenth-century artistic circles, influencing among others Samuel van Hoogstraten. More particularly, recent research has convincingly pointed out that painterly experiments to increase emotional appeal, e.g. Rembrandt, can be related to Junius’ theoretical considerations on evoking strong emotions.

For a thorough understanding of the influence of Peri Hupsous on seventeenth-century Dutch art we will follow a twofold approach. First, we will look at networks concerning the sublime by concentrating on the question who was acquainted with Longinus’ treatise. Second, we will look at the works of art themselves and link them to contemporary responses describing sublime experiences. For example, Vondel translated Sophocles’ Electra with the help of Isaac Vossius when the latter was studying Longinus’ treatise. In the same period Vondel’s preference shifted from Senecan to Greek tragedy. Therefore, we can look at how Peri hupsous influenced the playwright to create a coherent plot in which monologues and dialogues prevailed instead of the visual power of cruelties. Next, we relate this to contemporary authors lauding Vondel’s rehabilitation of Greek tragedy by underlining the overwhelming effect on the onlooker.

Vondel’s case points out that we also have to look at neighboring concepts, such as the discussion of Senecan cruelties. Although in Vondel’s oeuvre the Senecan dismay decreased in importance, Seneca’s influence maintained throughout the entire seventeenth century, as the tragedies of Jan Vos and Thomas Asselijn show, as well as prints and paintings by Jan Luyken and Jan de Baen. Seneca’s philosophical writing was used to defend the overwhelming experiences conveyed by the straightforward presentation of cruelties in the theatre and the visual arts. Thus, time and again the question was put in how far the onlooker could benefit from blunt representations of atrocity.

Besides, discussions on wonder were important means to promote understanding on the overpowering effect of art. New research on seventeenth-century Dutch painting theory and practice has pointed out that the term ‘wonder’ involved both the attraction to learn something unfamiliar, as well as sensuous joy and a recent close reading of laudatory poems on the Amsterdam town hall and Quellinus’ decorations clarifies that the term wonder was used in both the sense of admiration and stupefaction. The building was praised for its ability to bring the visitor to an overwhelming experience of joy, as well as terror; Whereas Quellinus’ decorations of the Citizen’s Hall were presented as being able to make the visitors feel in heaven, his sculpture of the tribunal brought them straight to hell. Next to the Senecan cruelties and the concept of wonder, Roman catholic theories on divine apparitions, Vasari’s terribilità and Aristoteles’ catharsis and thaumaston can be taken into account to have a better understanding of the ‘melting pot’ in which the Longinian sublime formed an increasingly important part for discussing and creating overwhelming experiences with art.

This research relies on the book volume Translations of the sublime which clarified that whereas the overwhelming power of art was important during all times, late sixteenth and seventeenth-century scholars were the first to follow antiquity and come to a theoretical understanding of this power thanks to the concept of the sublime.xiv Translations of the sublime further showed how these endeavors concurred with artistic experiments to enforce the overwhelming effect of art. The project Elevated Minds (ERC Starting Grant) that started in 2013 goes further on these findings concentrating on the sublime in the public arts in seventeenth-century Paris and Amsterdam. Among others, following questions may be treated:

– How did seventeenth-century Dutch poetics and art theory use Longinus’ Peri hupsous in discussions on the overwhelming effect of painting, print, sculpture, architecture and the theatre? And which other theories and concepts were similarly used in these discussions?
– Which artists were acquainted with these discussions and in how far did these discussions influence their work? E.g. how far can the sublime and related concepts be linked with the popularity of depictions of ship wrecks, ruins and nocturnes on the one hand and the emergence of grand cityscapes and church interiors on the other? How far can it elucidate the tension between the tragedies following Senecan and those following Greek tradition?
– How far can we relate the poetics and art theories with contemporary responses to artworks in which wonder is expressed? Can we speak of an increasing importance of responses relying on the Longinian sublime at the expense of other formats and concepts expressing overwhelming experiences evoked by art?

Possible subjects could be Quellinus’ sculptures in the Amsterdam town hall, Vondel’s tragedies, Jan Luyken’s prints of executions, Rembrandt’s Passion-scenes, Berckheyde’s townscapes, or the gruesome plays of Thomas Asselijn versus the classicist tragedies by Nil Volentibus Arduum. Our focus on the sublime can also lead to the reappraisal of less renowned art, among others the appalling nocturnes with huge fires of Egbert van der Poel, the terrifying storm scenes from Adam Willaerts to the Van de Velde family, or the grand, ruin depictions of Jan Asselijn, Willem Buytewech, and Willem van Nieulandt. 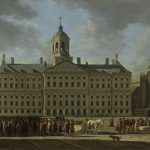