On 30 January 2019, Centraal Museum Utrecht acquired The Wedding of Cupid and Psyche by the Utrecht painter Joachim Wtewael at an auction at Sotheby’s in New York. It concerns a work in oil on copper, dating from between 1601 and 1603 and measuring 15.5 x 20.5 centimeters. This small mythological work by Wtewael had been on the museum’s wish list since 1933. The work was sold for 5 million dollars, and the purchase was sponsored by Vereniging Rembrandt, the Mondriaan Foundation and the National Purchase Fund of the Ministry of Culture, Education and Science. The art dealer Johnny van Haeften, specialized in Old Masters, conducted the bidding on behalf of Centraal Museum.

The Utrecht painter Joachim Wtewael (1566-1638) is famous for his small mannerist works on copper, particularly his erotic depictions. His oeuvre also comprises large panels and canvasses. Seven large family portraits are part of the Centraal Museum collection. The collection catalogue of 1933 already noted that the collection still lacked one of Wtewael’s works on copper. This smooth surface enabled Wtewael to make optimum use of his refined and delicate brush stroke techniques. In the 1952 catalogue, then-director Elizabeth Houtzager describes purchasing this work as her greatest wish. Her dream was shared by many and was again affirmed by senior curator Liesbeth Helmus in the collection catalogue of 1999.

Bart Rutten, artistic director: ‘The Wedding of Cupid and Psyche by Wtewael is Centraal Museum’s dream acquisition. Wtewael is famous for these small mythological works on copper. This work, with so many meticulously painted figures, is perhaps Wtewael’s most outstanding work. You can see the master’s hand in the exceptionally detailed brush strokes on this miniature scale.’

Wedding of Cupid and Psyche

Wtewael was inspired by the huge portrayal of the celestial banquet by Hendrick Goltzius in 1587, to depict the wedding of Cupid and Psyche, the god of love and his mortal bride. Goltzius created an imagery that would inspire an entire generation of Dutch artists. Joachim Wtewael responded to Goltzius’s spectacular achievement with an astounding gem of a painting, on the same theme, painted on copper in the first decade of the seventeenth century. 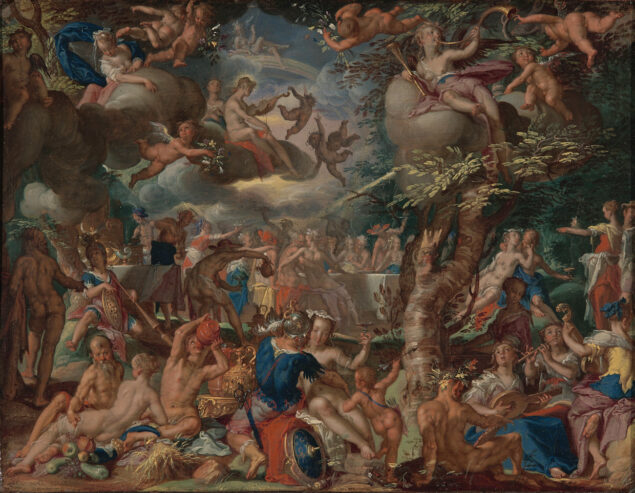 Wtewael chose to relocate the banquet scene to an earthly decor: the gods and goddesses have convened at a lush open place in the woods to celebrate the occasion with song and drink. While Cupid and Psyche embrace, seated with their guests at the table, other merrymakers have spread out across the scene. Some are seated on low floating clouds, caught among the trees, while others sit or lie or indulge in intimacies in the grass, some of them nude, others in colourful dress. Many of the gods can be recognised by their attributes: Hercules with his club and lion’s skin is on the left; dressed in bright blue and wearing his helmet, Mars embraces Venus while a putto aims an arrow at the amorous couple; Apollo plays violin seated on a cloud, while Iris gazes down on the merry scene from high above.

The Wedding of Cupid and Psyche will go on display at Centraal Museum Utrecht in April. Before that it will be displayed at the TEFAF art fair in Maastricht in the Vereniging Rembrandt booth.