225 CODART members, art historians, collectors, students and CODART Friends and Patrons attended our anniversary symposium in the Rijksmuseum on 14 and 15 October. Inspiring, high-quality contributions by a number of CODART members, followed by questions from the public, provided much food for thought. Many fruitful ideas and plans were discussed at lunch and during the coffee breaks.

One of the honorary guests of the symposium was Marjan Hammersma, Director General of Culture and Media of the Netherlands Ministry of Education, Culture and Science (OCW). In her opening address she said: "As members of the CODART network you are representing this network and its inspiration to share knowledge and expertise on a global scale, and we highly appreciate that. This clearly represents our common ambition to improve the conservation, organization and public access of valuable collections in general."

Once more we would like to thank Emilie Gordenker for chairing the symposium, the Rijksmuseum for its hospitality, the Karel van Mander Institute for its assistance in the program preparations, and the Friends of CODART Foundation for its financial support. 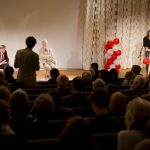