The New Hollstein Rembrandt has now been fully published. The 7-volume publication will be the standard reference work on the subject for the years to come. Additionally, exciting new projects have been announced on the publisher’s website on Peter Paul Rubens

The new catalogue raisonné of Rembrandt’s etchings published in the New Hollstein Dutch series, seven volumes with more than 2200 pages, will be the standard reference work on the subject for the years to come. More information.

A catalogue of the prints and a complete access to the images of the formidable oeuvre of the Flemish painter Peter Paul Rubens (1577-1640) is now a reachable task, especially given the completion of the Dutch and Flemish Hollstein volumes and the availability of online collection databases. More information.

A comprehensive publication of the prints published and engraved by the Antwerp De Jode family has long since been a desideratum in the research on the history of Netherlandish printmaking. Over the coming years such research will be conducted for The New Hollstein Dutch & Flemish series with the goal of publishing the entire fund of Gerard de Jode (1516/17-1591), all engravings by and after his son Pieter de Jode I (1573-1634), as well as the engravings by the latter’s son Pieter de Jode II (1606-after 1670/74) and his son Arnold de Jode (1638-in/after 1667). More information.

An exhibition of colour printed engravings and etchings traditionally attributed to Johannes Teyler (Nijmegen 1648 – c.1709) was shown in Nijmegen and Cleves in 1961. Although a slim volume its catalogue contains the – until now only – study of Teyler, his social context and prints.
The prints attributed to Teyler are typical, because all of the copper plates were inked in multiple colours in the so-called – á la poupée manner. This means that one plate is inked with two or more different colours and the impression shows a multi-colour image. More information. 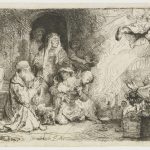 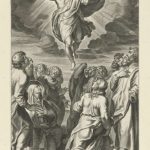