Beginning 7 March 2016, Adam Eaker will be Assistant Curator in the Department of European Paintings at the Metropolitan Museum of Art, where he will be responsible for the Northern Baroque works in the collection.

Until his appointment at the Met, Adam was Guest Curator and previously Anne L. Poulet Curatorial Fellow at the Frick Collection in New York. In that capacity, he co-curated the exhibition Van Dyck: The Anatomy of Portraiture (2 March to 5 June 2016). Adam previously worked as a research assistant at the Yale Center for British Art, where he contributed to the catalogue Varieties of Romantic Experience: Drawings from the Collection of Charles Ryskamp (2010), and as a researcher for the drawings dealer Martin Moeller-Pisani in Hamburg.

Adam holds a BA from Yale, and an MA and MPhil from Columbia, all in art history. He will defend his dissertation on the portraiture of Rubens and Van Dyck at Columbia this spring; research from this project has appeared as the article “Van Dyck Between Master and Model” in The Art Bulletin (June 2015). He was a recipient of a Riggio Fellowship from Columbia University and a research fellowship from the Belgian American Educational Foundation, which enabled him to spend a year as a visiting scholar at the Rubenianum in Antwerp. In addition to his specialization in early modern painting from the Low Countries and England, he maintains strong research interests in German and Scandinavian art. 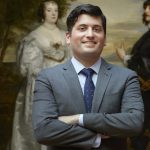