In a letter to the republic of Austria, the Czernin family has demanded the restitution of Vermeer’s world-famous painting The art of painting. The painting, now in the Kunsthistorisches Museum in Vienna, was bought from the family in 1940 by Adolf Hitler for his planned Führermuseum in Linz. The family claims Jaromir Czernin sold under pressure of the regime. On the basis of the involuntary character of the sale, the family claims the restitution.

After the war ended, Austrian officials claimed there was no evidence the painting was sold involuntarily. The painting therefore became property of the Austrian state. After that Vermeer’s work was hung in the Kunsthistorisches Museum, where it still is today.

The family now discovered new documents that prove the painting was indeed sold under pressure. It is unclear what will happen with the painting if the claim is acknowledged. The family’s lawyer states: "I would think it is best that the Republic [of Austria] buys the painting for a proper sum and that it stays where it is now." 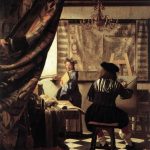