On August 26, the board of trustees of the Cleveland Museum of Art voted unanimously to name CODART member David Franklin, an internationally respected scholar of Italian Renaissance and baroque art, the eighth director of the museum. Franklin’s term begins on September 20, 2010.

Franklin currently serves as deputy director and chief curator of the National Gallery of Canada, where he is responsible for the core work of that museum, including its curatorial departments, art acquisitions, conservation, library and archives, and education division. At the National Gallery, Franklin balances significant leadership responsibilities with an active scholarly agenda. He is one of the museum’s most visible spokespeople, representing the organization in its outreach across Canada and initiating fundraising that secured individual and corporate support at an institution that previously had been accustomed to relying almost entirely on government funding. During his tenure, Franklin’s successes have ranged from increasing art donations from individuals across Canada to securing more than $2 million for a curatorial research fund and playing a central role in a fundraising event that raised nearly $2 million for the museum in one night.

At the same time, he curated several of the National Gallery’s noteworthy special exhibitions, including Italian drawings from the National Gallery of Canada (2001), Parmigianino (2003), and Leonardo da Vinci, Michelangelo, and the Renaissance in Florence (2005). Bernini and the birth of Baroque portrait sculpture (2008), organized in partnership with the J. Paul Getty Museum, was the first major exhibition of Bernini’s work in North America and the first comprehensive exhibition of the artist’s portrait busts. From Raphael to Carracci: the art of Papal Rome (2009) featured more than 150 works by artists including Raphael, Michelangelo, Titian, and El Greco from lenders including the Vatican Museums, British Museum, Galleria degli Uffizi, J. Paul Getty Museum, Metropolitan Museum of Art, Louvre, Morgan Library & Museum, and National Gallery in London. Franklin is currently organizing the exhibition Caravaggio and his circle in Rome, scheduled to debut at the National Gallery of Canada in the summer of 2011 before traveling to the United States.

Franklin has earned honors in Canada and abroad, including the 1995 Eric Mitchell Prize, one of the most prestigious awards given to art historians, for his publication Rosso in Italy: the Italian career of Rosso Fiorentino. This volume also was awarded the Yale University Press Governors’ Award for the most outstanding book published by an author under the age of 40. In 2009, the Italian government took note of his research, honoring Franklin with its Cavaliere dell’Ordine della Stella della Solidarieta Italiana (Knight of the Order of the Star of Italian Solidarity), the country’s highest honor for non-Italians, awarded to those who demonstrate exceptional service that furthers Italian culture.

A native of Québec, Franklin earned his Bachelor of Arts in art history from Queen’s University in Kingston, Ontario. He received both his master’s and doctorate degrees in European Renaissance art from the Courtauld Institute of Art at the University of London. He also was awarded an honorary Master of Arts by the University of Oxford.

Remarks from David Franklin as he is introduced to Cleveland staff and local media. 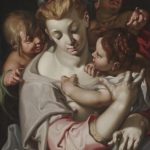