From the museum’s press release, 1 December 2012

Dutch delftware is an iconic product often regarded as a symbol of the Netherlands’ seventeenth-century Golden Age. Yet little of it is ever on show in Dutch museums. As the owner of one of the biggest and best collections anywhere in the world, the Gemeentemuseum Den Haag is about to remedy this situation once and for all. Set up by the Gemeentemuseum as a specialist platform on Dutch delftware, the Dutch-language website www.delftsaardewerk.nl has attracted tens of thousands of visitors over the last couple of years. The permanent presentation going on show in the period rooms on 1 December will give visitors to the Gemeentemuseum ‘flesh-and-blood’ access to the product’s fascinating 400-year history. Exhibits will include everything from the well-known ‘Blue Delft’ to gaudy multi-coloured examples and will range from simple plates to intriguing tulip holders – and even a modern Miffy moneybox. In addition, an installation will show how even contemporary designers find inspiration in this major cultural legacy of the past. Dutch delftware is as close to our hearts as ever it was!

The Dutch East India Company (VOC) started shipping Chinese porcelain to the Netherlands in the early seventeenth century. The shiny surface, amazing decoration and exotic shapes of the new ceramics captured the public imagination but only the wealthy could afford to buy them. The existing Delft earthenware industry took up the challenge and strove to produce pottery that looked exactly like oriental porcelain. The sophisticated and luxurious product that resulted was seen as the best possible alternative to the genuine thing. It was even referred to as Delft ‘porceleyn’. By around 1660, when Vermeer painted his famous View of Delft, the town had a multitude of potteries and in the late seventeenth and early eighteenth century Delft was the undisputed world leader in the production of this tin-glazed earthenware or ‘faience’.

DelftWare WonderWare will employ a fascinating thematic approach to give visitors a detailed picture of the Delft pottery industry over the centuries. This will be of interest not only to a wide Dutch public, but also to many foreign tourists. The presentation will show that the highly desirable oriental porcelain had a major impact on Dutch domestic interiors. A vast range of everyday and ornamental objects became available, both in Chinese porcelain and in Delft faience. By the eighteenth century, the two were used virtually indiscriminately. The presentation will, of course, also focus on De Porceleyne Fles – the only Delft pottery still active today (under the name of Royal Delft).

Traditional Dutch delftware retains its fascination and remains a continuing source of inspiration: a point illustrated by an eye-catching display of the Gemeentemuseum’s collection of historic spouted vases and twentieth-century pieces inspired by them.

This exhibition and the accompanying Dutch/English publication of the same name are the products of a unique collaboration with Aronson Antiquairs. This internationally renowned firm of antique dealers, which has existed since 1881 and specialises in Dutch delftware, is also the main sponsor of the www.delftsaardewerk.nl website. 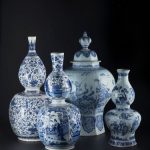 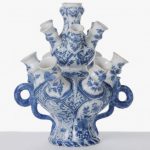