The Dordrechts Museum announced today it bought a painting by Jacob Cuyp (1594-1652) which was already in its collection. Research showed the work of art once belonged to textile producer and art collector Jacques Hedeman. He stored his collection in an Amsterdam bank vault before it was confiscated and sold off by the Nazi’s. The scene with a shepherdess in a landscape, acquired by the museum in 2002 from a German art dealer, will now stay in Dordrecht. Heirs of Hedeman, who passed away in 1948, have sold the painting to the museum.

The transaction is a result of the provenance research presented by the Netherlands Museums Association in October 2013. In 41 of the participating museums, 139 objects were found that have presumably been stolen, confiscated or forcibly sold as a consequence of the Nazi regime. Since then the commission received six claims by heirs and a further seven have been announced. 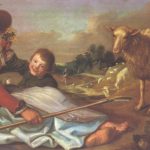