Information from the museum, 29 January 2015

The Museo del Prado has incorporated into its collection an important note and sketchbook known as the “Bordes manuscript”. This is one of four partial copies known after Rubens´s lost pocketbook; it includes at least two original drawings by Rubens (this and the other known versions of Rubens´s manuscript are the subject of a volume of the Corpus Rubenianum authored by Arnout Balis and David Jaffé that will be published in the next few months).

The “Bordes manuscript” is part of an extraordinary library of nearly 600 items, centered mainly on drawing books used by European artists from the Renaissance to the 20th century, and on treatises on anatomical proportions. This is one of the largest collections of its kind that exist; it was gathered by Juan Bordés and was owned by him until this week; it is now part of the Prado´s holdings. The Biblioteca Bordes will be incorporated into the Prado´s library. The “Bordes manuscript” is kept in the department of prints and drawings. 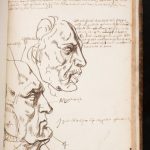