Yesterday the news reached us that Pieter van Thiel passed away on 1 August. He was an eminent scholar of Dutch and Flemish art, co-founder of the Rembrandt research project and director of paintings in the Rijksmuseum Amsterdam from 1964 to 1991.

Before he started in the Rijksmuseum he worked as the director of the Lichtbeelden Instituut in Amsterdam and the Photo documentation department of the Art Historical Insitute of Utrecht University.

For most scholars he is perhaps best known as the first author of All the Paintings of the Rijksmuseum in Amsterdam, the museum’s catalogue of paintings from 1976 (a supplement was published in 1992) and of course he was co-author of the first three volumes of the Corpus of Rembrandt paintings. Shortly after his retirement from the Rijksmuseum he also left the Rembrandt Research Project in 1993.

As the director of paintings in the Rijksmuseum he organized many exhibitions of which Prijst de lijst (1984, The catalogue later appeared in English: Framing in the Golden Age : picture and frame in 17th-century Holland (1995 ) and Rembrandt, de meester en zijn werkplaats (1991) are particularly noteworthy. In 1999 he published Cornelis Cornelisz. van Haarlem 1562-1638 : a monograph and catalogue raisonné. 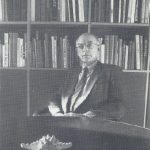