From the Getty Museum press release

"I have known Dr. Potts for almost fifteen years and have worked closely with him on policy positions taken by the Association of Art Museum Directors. I know him to be a person of integrity, intelligence, advanced learning, and refined connoisseurship,” said Cuno. “He knows and believes in the values of the Getty Trust and the combined strengths of its four programs. I am confident that he brings the vision and experience that will move the Getty Museum forward on an international stage."

"I am delighted to be joining the Getty Museum at such a promising time, when its leadership, ambitions and prospects are stronger than ever,” said Potts. "Like others in the museum world, I have for many years admired (and sometimes been frustrated by!) the quality of its collecting and the innovative way it pursues its scholarly and educational mission. It has evolved into much more than an artistic showpiece of national and international renown, however. With the Museum and its sister institutes devoted to research, conservation and philanthropy, the Getty represents a uniquely well-rounded ‘university of the arts.’ No other institution does more to collect, preserve and understand the history and materiality of art than the Getty, and I greatly look forward to working with the Museum’s outstanding staff in building on this achievement over the years ahead."

As director of the Fitzwilliam, Potts dramatically expanded and upgraded the exhibition program, leading to record attendance and increased sponsorship and donations. Endless Forms: Charles Darwin, Natural Science and the Visual Arts was named Exhibition of the Year for 2009 by Apollo Magazine and its catalog won the M.B. Berger Prize for British Art History. The recent exhibition Vermeer’s Women: Secrets and Silence set a new attendance record of over 150,000 visitors and received international critical acclaim. His acquisitions have included The Lutenist by Hendrick ter Brugghen, The Dead Christ Supported by the Virgin Mary and Mary Magdalene by Marcantonio Bassetti, and a Louis XIV marquetry cabinet-on-stand by André-Charles Boulle.

At the Kimbell, Potts presented numerous acclaimed exhibitions, including Matisse and Picasso: A Gentle Rivalry; Turner and Venice; Stubbs and the Horse; The Mirror and the Mask: Portraiture in the Age of Picasso (Exhibition of the Year 2007, Apollo); Gauguin and Impressionism; and Picturing the Bible: The Earliest Christian Art. He also led an active acquisition program, purchasing important sculptures by Bernini, Donatello, Michelozzo, Gian Cristofero Romano and a highly important 15th century German silver and gilt Virgin and Child; and paintings by Lucas Cranach the Elder and Gerrit Dou.

A specialist in ancient art, Potts also acquired for the Kimbell works from ancient Greece by the vase painter Douris and the sculptor Lysippos; an Egyptian 5th Dynasty funerary statuette; and a Maya royal jade belt pendent and Maya vases with painted and incised decoration. From China he acquired sculptures of the Tang period and a painting by Tan Zhirui of the Yuan Period. Potts served as a Trustee of the Association of Art Museum Directors (AAMD) and as a member of its task forces that drafted guidelines for U.S. museums on the acquisition and loan of antiquities.

At the National Gallery of Victoria, he oversaw the most significant addition to the Australian museum landscape in decades, with a $76 million redevelopment of the existing museum and the design development of a second venue of the Gallery on Federation Square devoted to Australian art. He introduced free admission, doubling attendance to over 1.2 million on a revenue-neutral basis.

Born in Sydney, Australia, Potts received his BA (Hons) from Sydney University and his doctorate in ancient Near Eastern art and archaeology from the University of Oxford. He has undertaken research and published widely on the art and cultures of the Near East and the Mediterranean world. Recent studies have focused on Mesopotamian art, history and historiography; the origins and spread of writing in the ancient world; and antiquities and cultural patrimony. Potts has conducted archaeological excavations in Jordan, Iraq and Greece. 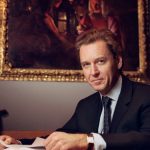