Information from the museum, 9 February 2011

This extraordinary new gift, another masterpiece in the Israel Museum’s growing collection of 17th century Netherlandish works of art, has a distinguished provenance history: It was part of the important British collection of Lord Burlington (until 1753), then in the possession of the Duke of Devonshire (1753–1922), and later in the collection of Count Laurent de Meeus of Brussels (1924–81), before being purchased by Saul and Gayfryd Steinberg, New York, and gifted to the Israel Museum.

Jacob Jordaens was one of the major Flemish Baroque painters, along with Peter Paul Rubens and Anthony van Dyck, who brought prestige to the Antwerp school of painting during the 17th century. After 1640, the year Rubens died, Jordaens became the most important painter in Antwerp for large-scale commissions, and the status of his patrons increased. Unlike his famous contemporaries, however, he never traveled abroad to study Italian painting, and his career is marked by an indifference to their intellectual and courtly aspirations. Except for a few short trips to Amsterdam he remained in Antwerp his entire life, and his paintings exude a typically Flemish ambience.

Although he painted primarily altarpieces and mythological and allegorical subjects, Jordaens is best known for his large genre scenes – such as The King Drinks – which combine the Brueghel family everyday-life scenes with the monumental scale of Rubens’s works. The painting on display here was created when Jordaens was at the peak of his career. Its subject was one of the artist’s favorites and he repeated it several times, creating different variations on this theme.

The Eve of the Feast of Epiphany is the twelfth day of Christmas – hence its name, Twelfth Night. The feast commemorates the Adoration of the Magi, when Christ was revealed to the three kings in Bethlehem. It is a celebration of food, wine, and merriment that is shared with the extended family. At this joyful banquet, one person is chosen and crowned as king for the evening. In this painting Jordaens featured the eldest person in the family as the elected royal and the rest of the family around the table are now his subjects. The moment depicted is when the “King” has been crowned, and he raises his glass to be greeted with cries of “the King drinks!” by an imposing family member dressed as the king’s fool, right behind him.

Combining an exuberant genre scene with a fine example of still life, the painting presents the celebration as taking place outdoors, under a trellis. Only the dark sky behind the group indicates the cold January weather but the flustered family members seems to ignore the cold or fight it with hearty food and drinks. Some of the people gathered here – like the man on the bottom left side, vomiting his drink, or the child at the other end of the table, urinating freely – have taken leave of their manners and sense of decorum, giving full liberty to their physical needs.

The table around which they are gathered is laden with Gufre (Brussels wafer), buns, fruit, and various kinds of beverages, some of the decanters left to cool in an impressive large cooling basin at the forefront of the painting, so much so that the viewer is tempted to sample the food and become part of the celebration . One can almost smell the frying eels at the center of the table, right in front of the King, and the sweet scent of the appetizing waffles in the front. This easy-going family seems to be enjoying life at the fullest, and the painter proudly presents the best of the Brabant way of life and the merry character of its people. 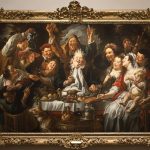