The FBI, along with Boston’s Isabella Stewart Gardner Museum and the United States Attorney’s Office for the District of Massachusetts, released new information about one of the largest property crimes in U.S. history—the art theft from the museum more than two decades ago. The FBI is appealing to the public for help in what is one of the FBI’s Top Ten Art Crimes.

The FBI believes it has determined where the stolen art was transported in the years after the theft and that it knows the identity of the thieves, Richard DesLauriers, special agent in charge of the FBI’s Boston office, revealed for the first time in the 23-year investigation. “The FBI believes with a high degree of confidence that in the years after the theft, the art was transported to Connecticut and the Philadelphia region, and some of the art was taken to Philadelphia, where it was offered for sale by those responsible for the theft.” DesLauriers added, “With that same confidence, we have identified the thieves, who are members of a criminal organization with a base in the Mid-Atlantic states and New England.” After the attempted sale, which took place approximately a decade ago, the FBI’s knowledge of the art’s whereabouts is limited.

Information is being sought from those who possess or know the whereabouts of the 13 stolen works of art—including rare paintings by Rembrandt and Vermeer—by publicizing new details about the case and continuing to highlight the $5 million reward for the return of the art. Although the FBI does not know where the art is currently located, the FBI is continuing its search, both in and beyond the Connecticut and Philadelphia areas. “With this announcement, we want to widen the ‘aperture of awareness’ of this crime to the reach the American public and others around the world,” said DesLauriers.

Anthony Amore, the museum’s chief of security, noted that the reward is for “information that leads directly to the recovery of all of our items in good condition.” He further explained, “You don’t have to hand us the paintings to be eligible for the reward. We hope that through this media campaign, people will see how earnest we are in our attempts to pay this reward and make our institution whole. We simply want to recover our paintings and move forward. Today marks 23 years since the robbery. It’s time for these paintings to come home.”

“The investigation into the Gardner Museum theft has been an active and aggressive effort, with law enforcement following leads and tracking down potential sources of information around the globe. Over the past three years, I have visited the museum several times, and each time I entered the Dutch Room and saw the empty frames, I was reminded of the enormous impact of this theft. I do remain optimistic that one day soon the paintings will be returned to their rightful place in the Fenway, as Mrs. Gardner intended,” said U.S. Attorney Carmen M. Ortiz. “As we have said in the past, the U.S. Attorney’s Office will consider the possibility of immunity from criminal prosecution for information that leads to the return of the paintings based on the set of facts and circumstances brought to our attention. Our primary goal is, and always has been, to have the paintings returned.”

To recover stolen items and prosecute art and cultural property crime, the FBI has a specialized Art Crime Team of 14 special agents supported by special trial attorneys. The team investigates theft, fraud, looting, and trafficking across state and international lines, with estimated losses running as high as $6 billion annually. The FBI also runs the National Stolen Art File, a computerized index of stolen art and cultural properties that is used as a reference by law enforcement agencies worldwide.

The FBI stressed that anyone with information about the artwork may contact the FBI at 1-800-CALL-FBI (1-800-225-5324) or the museum directly or through a third party, said Special Agent Geoffrey Kelly, who is the lead investigator in the case and a member of the Art Crime Team. “In the past, people who realize they are in possession of stolen art have returned the art in a variety of ways, including through third parties, attorneys, and anonymously leaving items in churches or at police stations.” Tips may also be submitted online at https://tips.fbi.gov.

The publicity campaign announced today includes a dedicated FBI webpage on the Gardner Museum theft, video postings on FBI social media sites, publicity on digital billboards in Philadelphia region, and a podcast. To view and listen to these items, visit the FBI’s new webpage about the theft: www.FBI.gov/gardner. 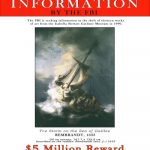 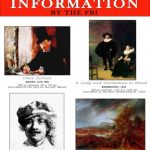 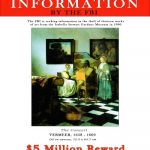