As of today, the Mauritshuis has temporarily devoted a room to five seventeenth century paintings, donated to the museum by Willem Baron van Dedem (1929-2015) in 2002. The paintings form one of the most significant bequests in the museum’s history.

The paintings are: Still Life of Tazza by Pieter Claesz, Still Life of Fruit and Wine Glasses on a Silver Plate by Willem Kalf, Brazilian Landscape with a House under Construction by Frans Post, Winter Landscape at Arnhem by Salomon van Ruysdael and Peasants Dancing outside a Bohemian Inn by Roelant Savery.

The five paintings are on display through 31 October 2016.

Information from the museum 1 September 2016

On 26 November 2015 Willem Baron van Dedem died at the age of 86. He was a passionate collector. Van Dedem’s paintings constitute the most important private collection of Dutch and Flemish Old Masters to be assembled in England, where van Dedem lived. Many museums, the Mauritshuis included, have benefited from van Dedem’s generosity as a lender.

Fourteen years ago, on 9 September 2002, Willem Baron van Dedem very generously donated five seventeenth century paintings to the Friends of the Mauritshuis Foundation. Key to this donation were Van Dedem’s fondness for the Mauritshuis and his good relations with Frits Duparc, director at that time. Duparc was given the privilege of selecting several paintings, provided he could explain their importance to the further development of the museum’s collection. The five paintings displayed in this room were selected.

At that time, Van Dedem said of the donation, "It is extremely satisfying to know that the paintings will hang here in the future, where everyone can see them." Van Dedem received two royal distinctions following the donation: the museum medal and Officer’s Cross of the Order of Orange-Nassau.

In accordance with the terms of the agreement, the paintings remained in Van Dedem’s possession, and only came to the Mauritshuis after his death in November last year. As a tribute to Willem van Dedem, we have installed this display. The paintings will be integrated into the permanent collection later this year. 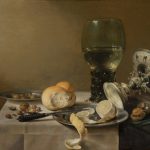 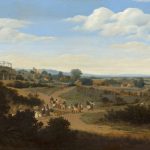