On Friday evening 3 November, longtime Patron of CODART George Abrams was awarded Knighthood by the Dutch Consul General during a festive dinner in his honor in Boston.

From the Consulate General of the Kingdom of the Netherlands in New York:

The Kingdom of the Netherlands, represented by Dutch Consul General Dolph Hogewoning, has appointed Mr. George S. Abrams as a Knight in the Order of Orange-Nassau for his significant contribution to the study and international promotion of Dutch art, particularly Dutch Old Master drawings. 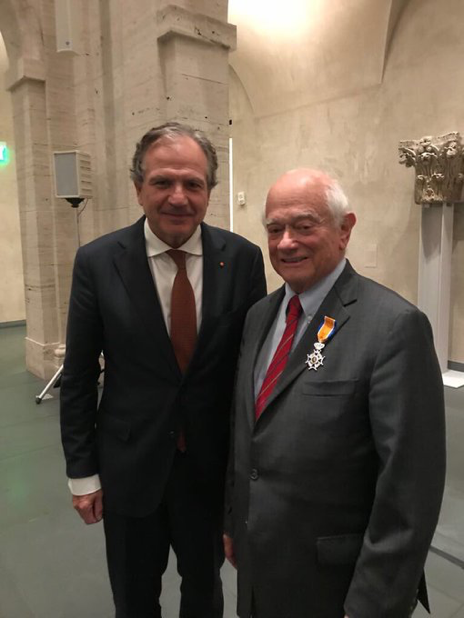 Consul General of the Netherlands, Dolph Hogewoning with Knight in the Order of Orange-Nassau George Abrams

Mr.  Abrams, a business lawyer in Boston, is an internationally respected collector of 17th-century Dutch drawings.  In addition, he has held advisory roles in many museums and cultural organizations, especially as a long-standing trustee of the Museum of Fine Arts in Boston and a longtime Chair of the Drawings Collection Committee at the Harvard Art Museums.  His extensive collection of drawings by Dutch masters, formed jointly with his late wife, Maida, has been exhibited in leading museums in Europe and the United States, including the Rijksmuseum in Amsterdam, the Fondation Custodia in Paris, the Albertina in Vienna, the British Museum in London and the Harvard Art Museums. In 1999, the Abramses donated 110 drawings to Harvard Art Museums, substantially strengthening its holdings in this area while making the art accessible to a wide audience.

In that same year and acknowledging the Abramses long involvement at the Harvard Art Museums, the museums renamed one of their curatorial positions as the Maida and George Abrams Curator of Drawings. The Harvard Art Museums now stand internationally among the best collections of Dutch drawings.

Mr. Abrams’ royal decoration comes on the heels of the latest gift from the Abrams Collection to a US museum.  The Harvard Art Museums announce the extraordinary gift of 330  16th- to 18th-century Dutch, Flemish, and Netherlandish drawings from the esteemed collection of Maida and George S. Abrams (Harvard A.B. ’54, LL.B. ’57), considered the best collection of such material in private hands. The gift further establishes the museums as the major site for the appreciation, research, and study of works on paper from the Dutch Golden Age in North America. This newest promised gift from the Abrams family brings tremendous depth and breadth to the museums’ holdings; the works represent over 125 artists and include extremely fine examples by major masters such as Rembrandt, Jacques de Gheyn II, Hendrick Goltzius, and Adriaen van Ostade, as well as a remarkable range of drawings by lesser-known masters who worked in a wide range of subjects and media. Impressive drawings by artists Nicolaes Berchem, Jacob Marrel, and Cornelis Visscher will help fill gaps in the museums’ collections. Taken as a whole, the Abrams Collection at the Harvard Art Museums reveals the critical role of drawing in the art world of the Dutch Golden Age.

The Order of Orange-Nassau bears the hyphenated name used by the royal family of the Netherlands since the 16th century. The Order is a chivalric order open to people from all nationalities who have earned special merits for society and deserve appreciation and recognition from society for the special way in which they have carried out their activities.

Journalists who want to learn more about the royal decoration can contact with Vera Kuipers at (917)-438-8495 or by email:  Vera.Kuipers@minbuza.nl