Starting on 28 October 2008, the 16th-century chapel in the Keizerstraat in Antwerp known as the Keizerskapel will be open for visits. The chapel has been acquired by CODART member Jean-Pierre De Bruyn, co-author of an exhaustive study of the monument.

In October 2008 the famous Keizerskapel in Antwerp came into the possession of Dr. Jean-Pierre De Bruyn, a member of CODART. This small church in the historic center of Antwerp was built by the guild of the cloth manufacturers between 1512 and 1514. It is situated in the Keizerstraat close to the homes of baroque painter Frans Snyders (1579-1657), burgomaster Nicolaas Rockox (1560-1640) and anti-reformation poet Anna Bijns (Antwerp, 1493-1575). Today the Keizerskapel is still one of the most prominent historical monuments in the well preserved Keizerstraat.

The Keizerskapel (also known as Saint-Anna’s chapel or Droogscheerderskapel, referring to the guild that built it in the beginning of the 16th century) still possesses most of its art treasures installed after the Iconoclasm of 1566 from which only one small statue representing the Holy Virgin (dating from about 1515/20) survived. Franchois Hals, father of the famous Antwerp-born painter Frans Hals (1582/83-1666), was a Droogscheerder and lived near the Keizerstraat in Antwerp before moving to Haarlem about 1585. The Keizerskapel underwent, like many other historic churches in Flanders and especially in Antwerp, a baroque renovation campaign in the 17th century. Sculptures from the studio of the de Nole family, others attributed to Guillielmus Kerricx (1652-1719) and Artus II Quellinus (1625-1700) such as those decorating the walls and the high altar, date from that period and are still present. They were already mentioned in the 17th-century inventories of the Keizerskapel. The confession (about 1650) on  the north-side is attributed to the circle of Artus I Quellinus (1609-68) and Peter I Verbrugghen (1615-86). The pulpit (about 1690) can be considered one of the masterpieces by Peter II Verbrugghen (1648-91) in collaboration with his younger brother Henricus-Franciscus Verbrugghen (1654-1724). An important collection of liturgical silver dating from the 17th, 18th and 19th centuries is still present, e.g. a beautiful monstrance from 1653 by Hendrik Corbion.

The interior of the Keizerskapel was immortalized in 1710 by Antwerp artist Alexander II Casteels in a beautiful small panel which is still present in the chapel. During the 19th century, the church underwent a neo-gothic renovation campaign which in the first place is visible in the stained glass by Leopold Pluys (1844-1911) and Edward Steyaert (1848-1932) and the many chandeliers made by the prominent Antwerp artist Albertus Jacobs (1837-1927).

The neo-baroque organ dates from 1864 and replaces a 17th-century Goltfuss organ. A few years ago, part of an old staircase was rediscovered, making access to the beautiful crypt which shortly will be arranged as a museum.

Today it is not easy to give historic churches a new destination besides their religious function. Most of these churches, especially those in Italy and Flanders, are prominent  tourist-attractions. Many possess art treasures of world renown. The center of Antwerp is endowed with several first-class historical churches, the best-known being the late medieval Cathedral of Our Lady. Another is Sint-Jakobs church, where Peter Paul Rubens is buried. The Keizerskapel is situated about 500 meters from these landmarks, in different directions.

Indeed, these churches were renowned burial places in ancient times. In the near future the crypt of the Keizerskapel will also be used for funerary purposes. Private persons willing to do so can acquire a niche in the crypt to discretely accommodate urn(s)., without interfering of course with the original 16th- century architectural features. These urns will be secured for centuries to come.

Through a foundation, the financial means thus acquired will be used to maintain the church. This foundation will consist of members of the clergy, art historians, nobility and capable advisors.

The church will also function as a museum presenting paintings by Antwerp artist from the circle of Rubens, especially Erasmus II Quellinus (1607-1678). To make a visit also attractive to youngsters, a small collection of meteorites and objects related to the history of space will be installed in the sacristy. This will enable young visitors to discover at the same time art treasures from their own historical past, which are so often overlooked by today’s young. Hopefully, this combination of funcitons will assure the preservation of the Keizerskapel for the generations to come.

Groups can visit the Chapel by appointment (+32 93 556 960 / jeanpierre.debruyn@skynet.be). Lectures and concerts will also be organized on occasion.

Masses are still celebrated in this beautiful church which remains in the first place a holy temple. 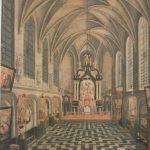