After a public fundraising campaign to purchase and retain for Britain Rubens’s preparatory sketch for a ceiling painting in Whitehall Banqueting Palace, Tate Britain was given enough additional support on the eve of the deadline to make the purchase.

Tate announced today that the first preparatory sketch made by Sir Peter Paul Rubens (1577-1640) for his magnificent scheme of ceiling paintings in the Banqueting House, Whitehall, has been saved, thanks to the last-minute intervention of the National Heritage Memorial Fund, Tate Members and The Art Fund, all of whom increased their original pledges on the day of the final deadline, 30 September 2008.

The vendor of The Apotheosis of James I and other studies: sketch for the ceiling of the Banqueting House, Whitehall 1628-30, whose family has owned the work for over two centuries, also generously agreed to waive £300,000 from the asking price of £6M and accept £5.7M net of tax. The work was valued at £11.5M.

The fundraising campaign was launched by Tate in March 2008 working in close partnership with the leading independent art charity, The Art Fund, which granted £500,000 and later an additional £100,000 to help bridge the end gap. This is the largest gift The Art Fund has granted towards a single work of art. The major donor was the National Heritage Memorial Fund, a fund of ‘last resort’ for the nation’s most outstanding pieces of heritage, which granted £2M in July and then in an exceptional move granted a further £221,000to take us to the £5.7M on the last day. Tate Members made the second largest gift of £1.5M, including £45,000 from individual members following a direct appeal for support, to celebrate their 50th anniversary. This is the largest contribution made by Tate Members towards an acquisition. Tate Trustees committed £1M of Tate funds towards the purchase. The Monument Trust gave £150,000 and additional generous donations were received from Manny and Brigitta Davidson, The Michael Marks Charitable Trust, Danny Katz, Sir Harry and Lady Djanogly, The Basil Samuel Charitable Trust, The Flow Foundation and David and Susan Gradel via The Art Fund.

David Starkey joined the public campaign to save the work in June when the sketch was united with the paintings of the Banqueting House ceiling in Whitehall for the very first time.  Speaking about the sketch, David Starkey said:  “This work is of the utmost significance to British history. The Banqueting House with its stunning Rubens ceiling is all that remains of the original Whitehall Palace after it was destroyed by fire in 1698. The ceiling was originally commissioned by James I of England and VI of Scotland to celebrate his achievement in bringing about the peaceful union of Scotland and England with his accession to the English throne after the death of Elizabeth I. The Banqueting House ceiling is the most important painting set within an architectural context in England and this sketch is the key to its composition.  The loss of the sketch would have been a fundamental betrayal of our national heritage and I am delighted that it will remain on public display in London.”

Rubens has always been recognised as one of the greatest painters in Western art and his ceiling paintings for the Banqueting House, Whitehall comprise the most important artistic commission of the period in Britain. The Apotheosis of James I and other studies gives a crucial insight into the artist’s earliest ideas for the design.

The Banqueting House was designed by Inigo Jones and constructed between 1619 and 1621. Rubens was in London from 1629-30 acting as a diplomat working for peace between Spain and England. During his time here the commission to paint the ceiling was confirmed. This initial sketch was probably painted in London and shown to King Charles I, James I’s son, for approval. The final nine canvasses were painted in his Antwerp studio and installed in London around mid-March 1636.

The Apotheosis of James I and other studies is currently on display in Room 1 as part of the BP British Art Displays at Tate Britain. 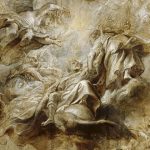