Keramiekmuseum Princessehof has acquired a rare 17th-century delftware vase. this type of vase is unique, no comparable vase is known. The acquisition has been made possible with support from the Ottema-Kingma Stichting and the Vereniging Rembrandt.

The vase is dated ca. 1685-1690. It consists of a vase and a lid, both with six spouts each. The decorations are inspired by the porcelain that was made during the reign of the last Ming Emperor Chongzhen. Another characteristic of this type of porcelain are the tulip motives on the spouts of the vase. The Princessehof shows an exhibition on Ming porcelain until 5 January 2014. 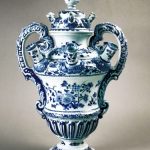