The Kimbell Art Museum announced today the acquisition of a major painting by Jacques de Gheyn II (1565-1629), one of the founders of flower painting in the Netherlands. Vase of Flowers with a Curtain, dated 1615, is one of the artist’s largest known flower paintings, measuring 43 ¼ x 29 ¼ inches (109.8 x 74.5 cm). De Gheyn never sold it and seems to have kept it in his studio as a showpiece—to demonstrate his skills in this relatively novel artistic genre. 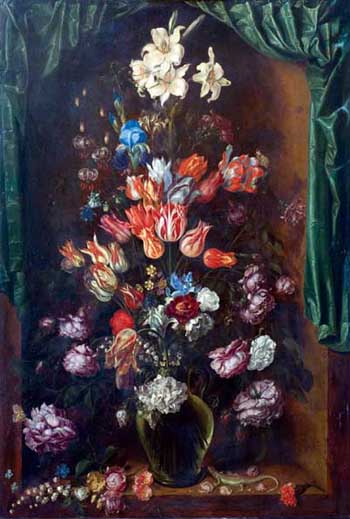 FORT WORTH— Scholars have long recognized Vase of Flowers with a Curtain as a landmark in the history of flower painting even though it was a “lost” work, kept in a British private collection since 1924, never exhibited in public, and known only in the form of old, black-and-white reproductions. Its reappearance and acquisition by a museum is a significant event in the study of Dutch art. The work adds an important new dimension to the Kimbell’s collection, which hitherto lacked an example of Dutch flower painting or still life.