One of the most dramatic spaces in the Museum, the Koch Gallery has been re-opened this week, after a three-month-long transformation. Tapestries splendidly complement an astounding array of Old Master paintings against a background of rich damask. A handsome pair of silver Baroque trumpets used in royal ceremonies for the German House of Hanover join the Museum’s celebrated collection of Hanoverian silver.Additional seating and improved acoustic and lighting systems also transform the space into a sumptuous grand room fit for royalty.

From the ArtDaily.org newsletter, 12 September 2012

The iconic Koch Gallery features masterpieces drawn from the Museum’s renowned European collection. Among the approximately 40 paintings on view are Nicolas Poussin’s Mars and Venus (about 1630), Diego Rodríguez de Silva y Velázquez’s Don Baltasar Carlos and Dwarf (1632), Peter Paul Rubens’s Head of Cyrus Brought to Queen Tomyris (about 1622–23), and Guercino’s Semiramis Receiving Word of the Revolt of Babylon (1624). A major conservation effort was undertaken to treat Anthony van Dyck’s Isabella, Lady de la Warr (about 1638), which was acquired by the MFA in 1930. It was recently rediscovered in storage, badly in need of attention and a new frame. Also featured in the gallery are select loans, including Frans Francken’s Allegory of Man’s Choice between Virtue and Vice (Private Collection, 1635). 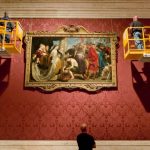