Manfred Sellink will be the successor of Paul Huvenne as the director of the Royal Museums of Fine Arts in Antwerp (KMSKA). CODART would like to take this opportunity to congratulate Manfred Sellink with his new position and the KMSKA with its fine new director. Manfred Sellink has been a CODART member from the very beginning of CODART in 1998 and member of our board since 2008.

Flemish Minister of Culture Sven Gatz is very proud to announce that Manfred Sellink will succeed Paul Huvenne as the new General Director and Head Curator of the Royal Museum of Fine Arts Antwerp (KMSKA). The KMSKA is one of the biggest Flemish cultural institutions and is part of the Flanders Department of Culture, Youth, Sports and Media.

Manfred Sellink (born 1962) is currently General Director of the Bruges Museums (with such museums as the Groeninge Museum, the Gruuthuuse Museum and the Sint-Janshospitaal). The dutchman was elected after an extensive recruitment procedure. Sellink holds a PhD in Art History (Vrije Universiteit Amsterdam). His dissertation focused on the engraver and print publisher Philips Galle (1537-1612). Sellink is widely renowned as a specialist in several art historical issues such as the life and work of Pieter Bruegel the Elder, prints and drawings in the Low Countries in the second half of the 16th Century, and landscapes in the 16th Century in the Low Countries.

Manfred Sellink also is a professor at the University of Ghent. On many occasions, Sellink was invited to speak at universities and conferences worldwide. He is a member of national and international network organizations (such as CODART) and facilitating organizations.

Sellink will join the team of the KMSKA as soon as possible. 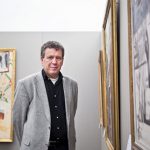