The Mauritshuis has acquired the painting Still Life with Cheeses, Almonds and Pretzels by the Flemish painter Clara Peeters (c.1580/1590 – in or after 1621) from a private owner. The quality of the painting, its intimate character and its excellent state of preservation make it a valuable addition to the Mauritshuis collection. This new acquisition is among Clara Peeters’s finest works.

Emilie Gordenker, director of the Mauritshuis, comments, “The Mauritshuis had its eye on this special painting for some time, but it was not until early 2012 that the owner was prepared to sell it to the museum. We are delighted to have had another opportunity to acquire a rare painting by a seventeenth-century woman artist from a private owner. This is also a valuable addition to Dutch public art collections as a whole.”

This new acquisition was made possible by the highly generous support of the Friends of the Mauritshuis Foundation, the BankGiro Lottery, the Rembrandt Association (also thanks to the Prins Bernhard Cultuur Fonds and the A.L. Roeters-van Lennep Fund of the Rembrandt Association) and a private donor. Because of the ongoing expansion and renovation of the museum, this acquisition is now on display at the exhibition Masters from the Mauritshuis – At the Gemeentemuseum The Hague. From mid-2014 onwards, the painting will form part of the permanent exhibition at the renovated Mauritshuis.

The Antwerp artist Clara Peeters was a gifted painter of still lifes, and one of the few women artists of the early seventeenth century. While her work is greatly admired today, almost nothing is known about her life. We only know her full name because she signed it on a few of her works, such as the one acquired by the Mauritshuis. Active from 1607 to 1621, she painted mainly banquet pieces, combining simple foodstuffs with precious objects. In the painting Still Life with Cheeses, Almonds and Pretzels, she placed cheeses, curls of butter, pretzels and a roll beside a gilt Venetian glass and a Chinese Wan Li dish holding figs and almonds. Most of the objects depicted can also be found in other still lifes by Clara Peeters, including the beautifully rendered knife extending beyond the edge of the table in the foreground – a convincing illusionistic effect.

Clara Peeters put great care into the precise execution of details, such as slight irregularities in the objects, as well as the almost tangible rendering of the different surfaces. Compelling examples include the crumbly texture of the dark green cheese, the soft curls of butter, the bright glints of light on the wine glass and the fainter reflections in the liquid contained in the glass. Fortunately, this attention to detail and to rendering different materials did not lead Clara Peeters to paint stiffly. Instead, she used a loose brushstroke, a sign of great technical mastery.

One striking object in this banquet piece is the silver bridal knife, richly decorated with figures representing the virtues of Faith and Moderation. Clara placed her signature on that knife, and it is tempting to suppose it might have been a wedding gift to Clara herself. When the painting is examined at very close range, the reflection of a woman’s face with a white cap is visible in the pewter lid of the earthenware jug. This self-portrait was Clara’s second signature on the painting, as it were.

Major addition to the collection

This attractive painting is one of a small group of still lifes with cheeses in Clara Peeters’s oeuvre. Before now, only one of those still lifes was in a museum collection (at the Los Angeles County Museum of Art). There are very few works by Clara Peeters in Dutch public collections.

Within the Mauritshuis collection, this Clara Peeters painting will form a welcome bridge between the sixteenth-century Kitchen Scene with Christ at Emmaus by Joachim Beuckelaer and the Haarlem still lifes of Pieter Claesz and Willem Claesz Heda. It also forms a superb complement to the work of the women painters Judith Leyster, Rachel Ruysch and Maria van Oosterwijck, who are already represented by masterpieces in the Mauritshuis collection.

The Mauritshuis has one of the world’s greatest collections of Dutch and Flemish seventeenth-century paintings. The museum attaches great importance to a collection policy that is both active and responsible. Purchases are financed with private funds, and sponsors must meet a number of strict requirements. The work of art must fill a gap in the collection, and the painting must be of high quality and in good condition. Furthermore, any acquisition must suit the intimate character of the seventeenth-century city palace that is home to the museum. Paintings are not purchased to be kept in reserve; only paintings that can be placed on permanent display are eligible. Finally, the work must form a valuable addition to Dutch public collections, viewed as a whole. The Clara Peeters painting that has now been acquired by the Mauritshuis meets all these criteria, forming a link that was not yet present in the Netherlands between early Flemish and Dutch food still lifes. 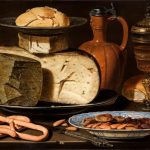