As of today, the Mauritshuis is the proud new owner of a special flower still life: Narcissi, Periwinkle and Violets in a Ewer (ca. 1562) by German painter Ludger tom Ring the Younger (1522-1584). The museum has obtained the painting on permanent loan from the Foundation Friends of the Mauritshuis, which recently purchased it at an auction in New York. The panel is an unusually early example of an independent flower still life, making it extremely rare.

Emilie Gordenker, director of the Mauritshuis: "An early sixteenth-century painted flower still life such as this acquisition is a first for the Mauritshuis and for any Dutch public collection. The Mauritshuis has been seeking to add such a painting to its collection for some time. Ludger tom Ring’s works have not been represented in any Dutch collection – until today. We are extremely thankful to our Friends for acquiring this painting and placing it on loan to the Mauritshuis."

After 1600, flowers became a popular independent subject in paintings. Artists such as Jan Brueghel the Elder and Ambrosius Bosschaert the Elder then started painting flower still lifes at about the same time. Ludger tom Ring anticipated this trend by about forty years. He was therefore a pioneer, and painted only six other flower still lifes aside from this acquisition, all of which are in foreign collections.

Importance of the acquisition

The exceptionally fine Dutch and Flemish flower still lifes of the Mauritshuis offer an excellent overview of the development of the genre. The painting by Tom Ring provides an attractive prelude to the still lifes from the first quarter of the seventeenth century by painters mentioned above, such as Jan Brueghel the Elder and Ambrosius Bosschaert the Elder. Compared to the modest flower still life by Tom Ring, those compositions are much more ambitious. They depict larger bouquets, more exotic species, and combine types which do not blossom at the same time in real life. These paintings thereby show something that cannot exist in reality, as it were surpassing nature. All the plants in the newly acquired work bloom in the spring. Ludger tom Ring seems to have painted an existing bouquet, and in doing so he immortalised a bunch of spring flowers that can now be enjoyed the whole year round.

For more information on the artist, the flowers that are depicted and the Friends of the Mauritshuis Foundation, please consult the press release. 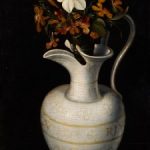 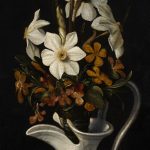 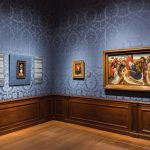