The Mauritshuis has acquired the exceptional painting Still Life of a Bouquet in the Making by Dirck de Bray (c.1635-1694) from a private collection. This spring bouquet is a fine addition to the museum’s rich collection of 17th-century flower still lifes, which forms an important part of the collection, with highlights by artists such as Ambrosius Bosschaert the Elder and Jan Davidsz de Heem.
‘The Mauritshuis is delighted with this acquisition. Not only is this virtuoso flower piece an exceptionally beautiful painting, but it is in superb condition and is also extremely rare’, says Emilie Gordenker, Director of the Mauritshuis.

The new acquisition was made possible thanks to the support of the BankGiro Lottery, the Rembrandt Society (in part from the Stortenbekerfonds), as well as a private collector. It will be on display in the museum from today.

Still Life of a Bouquet in the Making forms a high point in the small oeuvre of Dirck de Bray, both because of its uncommon subject as well as the painting’s unusual composition. The picture takes a special place in the development of Dutch flower still life painting during the Golden Age. At this time, painters such as De Heem were producing lavish showpieces: fanciful bouquets of flowers taken from different seasons, all perfectly arranged in a vase. By contrast, De Bray chose to portray a real bouquet as it was being made, with flowers from a single season, in this case spring flowers such as anemones, columbines, tulips and daffodils. The soft light, the warm colour palette and the nonchalant composition in which some of the flowers have yet to be arranged in the vase, their stems still lying to one side, all catch the eye. This last feature is a rarity in 17th-century flower pieces. Equally unusual is that the edge of the table has not been depicted, which gives the illusion that the vase is standing further back in space and leaves more room for the loose stems. This sense of space has been further emphasised by De Bray’s use of a refined contrast of light and shadow.

Dirck de Bray belonged to a well-known Haarlem family of painters. His father and teacher was the painter and architect Salomon de Bray. Dirck’s eldest brother Jan followed in Salomon’s footsteps and another brother Joseph also made a number of paintings. Dirck trained as a bookbinder and was initially active as a graphic artist. After losing most of his family to a plague outbreak in 1664, Dirck turned to painting, where it seems he took over from the late Joseph: the first flower piece he signed in 1665 had been started by his brother. Though not particularly productive, Dirck was certainly a skilled painter who enjoyed a degree of recognition: in 1675, he was secretary for the Haarlem Guild of St. Luke. Dirck de Bray’s work includes hunting still lifes, religious still lifes and some seven flower pieces which were painted between 1665 and 1675.

The new acquisition has been made possible thanks to the financial support of, among others, the BankGiro Lottery. The Mauritshuis has enjoyed structural support from this lottery since 1998. This is the latest in a series of eight purchases that has in part been made possible by the BankGiro Lottery. Financial support for the acquisition was also provided by the Rembrandt Society (in part from the Stortenbekerfonds), as well as a private collector. 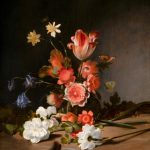