The research for Genre Painting in the Mauritshuis has yielded new discoveries and insights. For example, Cornelis Dusart’s painting of a Country Inn actually bears a double signature: research revealed another name above Dusart’s signature, that of his teacher Adriaen van Ostade. The painting was probably an unfinished work by Van Ostade that was completed by his apprentice following his death in 1685. 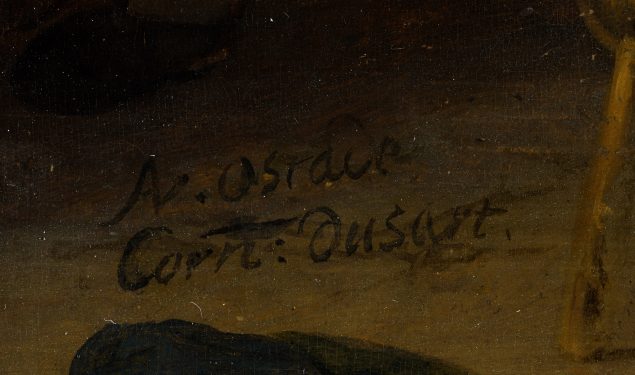 Signatures of Cornelis Dusart and Adriaen van Ostade
Detail of the Peasant Inn
Mauritshuis, The Hague

Another notable discovery concerns Jan Miense Molenaer’s series of the five senses. The artist seems to have been far bolder in his original composition of Touch than in the final version. The painting depicts a farmer putting his hand up a woman’s skirt and she retaliating by beating him about the head with a slipper. X-rays show that in the original version the skirt was lifted far enough to show the woman’s bare leg, but the final version is far more chaste. It appears that the artist censored his own work. 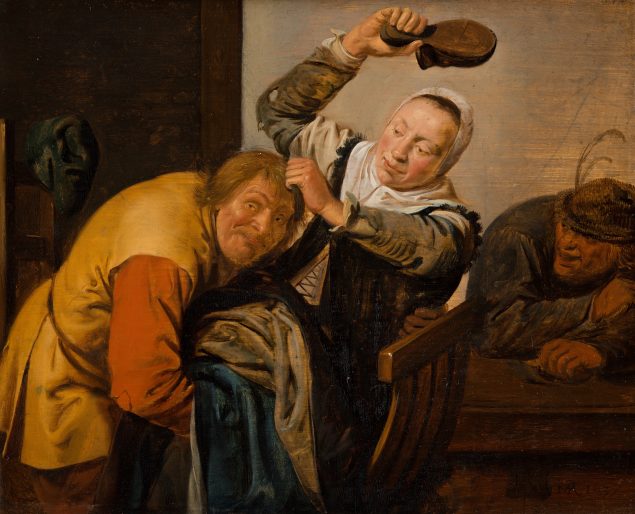 Jan Miense Molenaer’s wife Judith Leyster – one of the few professional female artists of the Golden Age – took a similar decision in creating her work Man offering Money to a Young Woman. The painting shows a bearded man offering money to a young woman, who ignores him and concentrates on her needlework. Infrared photographs show that the man was initially depicted with his hand resting on the woman’s neck, but in the final version his overtures are not quite so bold.

Similarly intensive research shows that Kortegaarde, a painting by the eighteenth century artist Cornelis Troost, is far more than simply an everyday scene. The work contains myriad references to the political situation of the time. In the year it was painted – 1747 – French forces stood poised to invade the Dutch Republic. The painting is intended to show the Dutch well able to stand their ground militarily. Bottom left Troost depicts both a book and a design drawing by the then famous military engineer Menno van Coehoorn (1641-1704).

‘Academic research is one of the core activities of the Mauritshuis’, says Director Emilie Gordenker. ‘This collection catalogue is set to become a key reference work on Dutch and Flemish genre painting, not only for the museum but for the entire field.’

Genre Paintings in the Mauritshuis