The Victoria and Albert Museum announced the acquisition of the earliest and most detailed depiction of Henry VIII’s famed lost palace of Nonsuch that once stood in Cheam, Surrey. This signed and dated watercolor by the celebrated Flemish painter Joris Hoefnagel was made in 1568. Subject to a temporary export ban earlier this year, it has now been saved for the nation. Purchased with the assistance of the National Heritage Memorial Fund (NHMF) and the Art Fund, the watercolor – the most faithful of only six surviving depictions of the palace – joins the national collection of British miniatures and watercolors at the V&A. It is on display in the Museum’s British Galleries. 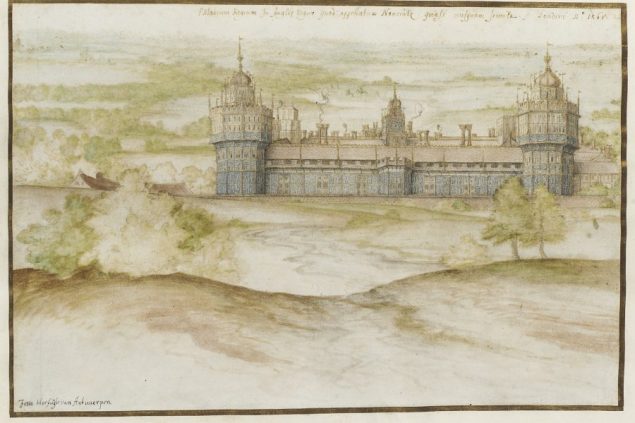 Called Nonsuch, as no other palace could compare with it, this ambitious building was commissioned by Henry VIII in 1538. Its towered façade decorated with elaborate plasterwork in a Franco-Italianate style sought to rival Fontainebleau, the residence of Henry’s arch competitor, the French king François I. Its lavish stucco reliefs and carved slate decoration, all portrayed by Hoefnagel in exquisite detail, made the palace one of the most important buildings of the English Renaissance. Still unfinished at the king’s death in 1547, it was purchased from Mary I in 1557 by Henry Fitzalan, 12th Earl of Arundel (1512-80), who completed the palace and most likely commissioned Hoefnagel’s watercolor. The palace was later acquired by Elizabeth I in 1592 and became one of her favorite residences. It stood for nearly 150 years, but was demolished between 1682 and 1688 by Charles II’s mistress, the Duchess of Cleveland, who sold its raw materials to pay off her gambling debts.

Mark Evans, Senior Curator of Word and Image at the V&A, said: “Painted in 1568 by the last of the great Flemish illuminators and a foremost topographical artist of the day, this is a rare and beautiful work of outstanding importance. Among the earliest surviving English landscape watercolors, it brings to life one of the greatest monuments of the English Renaissance, now lost to us. We are delighted to acquire a picture of such quality and historical importance for our visitors to enjoy.”

Born at Antwerp in 1542, Joris Hoefnagel was a highly cultured painter who corresponded with humanists and ended his days at Vienna as court artist to the Holy Roman Emperor. He travelled widely and the newly acquired watercolor proves that he visited England in 1568. Hoefnagel contributed over 63 topographical views to the atlas of world towns, Civitates Orbis Terrarum, published in Cologne in six volumes between 1572 and 1617. This is his first major work to enter the collection of the V&A.