Lot and His Daughters, the painting by Rubens that set a new record at Christie’s London’s old masters sale this year, has been given on loan to the Metropolitan Museum of Art by its new owner. The large canvas, measuring two meters across, can be seen next to the Met’s Venus and Adonis painted by the same artist in the 1630’s. The paintings have been reunited for the first time in over a century since both of them were in the collection of the Dukes of Marlborough at Blenheim Palace in Woodstock, Oxfordshire. According to Adam Eaker, Assistant Curator of European Paintings at the Metropolitan, Lot and His Daughters, painted by Rubens around 1613-14 was expanded at the top to make it into a true pendant for the Venus and Adonis. This becomes clear now that the two can be seen next to each other.

Last July, the painting fetched $58.1 million at Christie’s London’s old masters sale, setting a new record in the category for the house. It is the second-most expensive work ever sold at auction by the artist, following The Massacre of the Innocents (1609–11), which was sold for $76.5 million at Sotheby’s London in July 2002.

Lot and His Daughters will be on view in New York through September 2017.

Information from the lot essay

Sir Peter Paul Rubens’s Lot and his Daughters is a magisterial masterpiece by the greatest artist of the Northern Baroque. Beautifully preserved and painted with striking bravura, it has long been known about but little seen. It was first discussed in print at least as early as 1766, when Thomas Martyn saw it in the Marlborough collection at Blenheim Palace and included it in the first volume of The English Connoisseur. Prior to that it had graced the collections of European royalty and important Antwerp merchants. Since the 19th century, it has been listed in all the major catalogues of Rubens’s paintings, yet it has been hidden from public view for over a century. Known until now only from a black and white photograph, its reappearance establishes it as one of the grandest and most important private commissions of Rubens’s early maturity and one of the greatest paintings by the master to have remained in private hands. 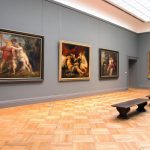 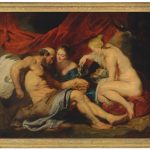