The painting The Wine of Saint Martin’s Day, that has been identified as a possible Pieter Bruegel the Elder by CODART member Dr. Manfred Sellink in 2007, and since then has undergone thorough restauration and research by the Museo Nacional del Prado, is being exhibited since yesterday by the museum in Madrid. In 2010 the museum announced the painting to be a genuine masterpiece by Pieter Bruegel the Elder (see related news 24 September 2010).

The Museo del Prado is presenting to the public for the first time The Wine of Saint Martin’s Day by Pieter Bruegel the Elder, the leading figure within 16th-century Flemish painting. Following the recent acquisition and subsequent restoration of the painting, it will be displayed in Room D in the Jerónimos Building until 25 March. In addition to highlighting the exceptional nature of a new discovery and acquisition of a work by Pieter Bruegel the Elder (of whom only 41 paintings are known), the presentation of the painting alongside an x-ray of it and an explanatory video detailing its restoration will allow the visiting public to appreciate the key phases within its complex restoration and to assess the final results of that process.

The definitive attribution to Pieter Bruegel the Elder of The Wine of Saint Martin’s Day represents one of the most important discoveries in many years with regard to the oeuvre of this artist, a figure of even greater importance than Quintin Massys and Joachim Patinir, the two other leading Flemish painters of the 16th century. This new addition to the Prado’s collection of one of the most dazzling and complex compositions by the artist means that the museum now possesses two works by his hand, the other being The Triumph of Death (previously the only other known painting by Bruegel in Spain), a masterpiece by the painter that was formerly in the Spanish royal collection (cat. 1393, Museo Nacional del Prado. Oil on panel, 117 x 162cm, ca.1562).

In November 2009 the tüchlein of The Wine of Saint Martin’s Day came to the Prado via Sotheby’s from an old Spanish collection in which it had traditionally been attributed to Pieter Bruegel the Elder. It entered the museum for study and with a possible view to acquisition. The technical analyses undertaken clearly revealed the artist’s unique pictorial handwriting, which had been concealed beneath a thick layer of polyester varnish. The removal of this layer allowed Bruegel’s technique and style to become fully evident on the surface. Furthermore, the attribution was confirmed with the reappearance of the signature in September 2010, facilitating the acquisition of the painting for the museum’s collection at the end of that year.

Or go to the Prado’s website where more information is available about the project (in English). 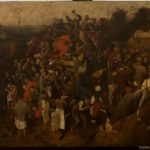 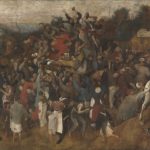