Information from the museum, 8 October 2010

The Museum Mayer van den Bergh in Antwerp will show, from next week on, a painting attributed to Jan Mandijn (Haarlem 1500- Antwerp 1560). The painting belongs to the Jheronimus-Bosch-revival in Antwerp during the16th century. The panel (107 x 149 cm), representing the Carrying of the cross to Calvary, belonged to the private collection of the late Victor Jacobs van Merlen, formerly president of the board of Regents of the Museum Mayer van den Bergh, and before that to his father, Louis Jacobs van Merlen, also former president of the board of Regents. The work has been given to the King Boudouin Foundation, through wich it is given in permanent loan to the museum. It it the only work to be signed with the monogram said to be that of Jan Mandijn, although the fact that its style is very different from his fully signed works poses problems that deserve new critical attention. It has not been in public view since more than 50 years. Actually the gift is the subject of some physical exminations and material analysis. The results will published before the end of the year by Jos Koldeweij and Mathhijs Ilsink.

The painting will be exhibited permanently next to other Bosch-revival artists such as Pieter Bruegel the Elder and Pieter Huys. 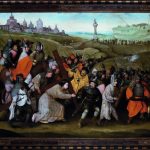