The Royal Museum of Fine Arts in Antwerp and the Suermondt-Ludwig Museum in Aachen are planning an important exhibition in 2020-21 to commemorate the extraordinary journey that Albrecht Dürer made to Antwerp in 1520-21.

Almost 500 years ago, on the 12th of July 1520, Albrecht Dürer, his spouse Agnes as well as their maiden servant Susanna, left Nuremberg to set out for Antwerp. This journey, by carriage and ship, would take 22 days. On the 2nd of August the travelers would reach Antwerp, only to return in Nuremberg exactly one year later.

The purpose of this remarkable journey was twofold. First and foremost Albrecht Dürer needed Charles V to reinstate the privilege that was granted to him by Emperor Maximilian I. This privilege indicated that the City of Nuremberg was ordered by the emperor to pay the artist 100 Guilders every year. With the death of Maximilian this privilege came to a halt immediately and could only be reinstalled by the emperor’s grandson and successor, Charles V, but only when the latter had been crowned King. 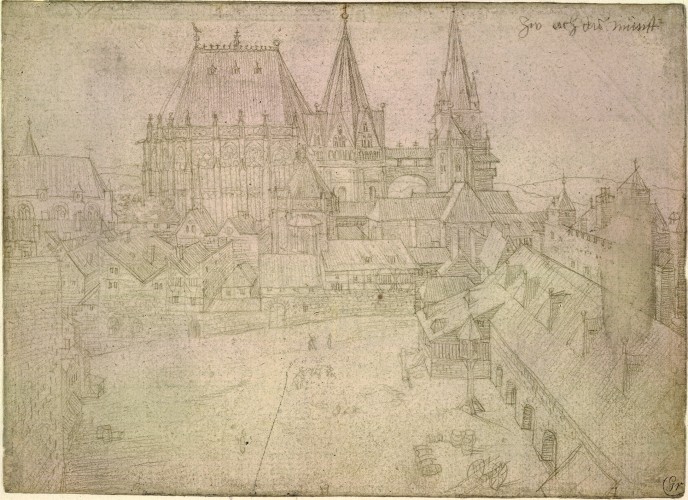 This celebration would take place in Aachen, on October 23rd, 1520. Dürer had pleaded with Charles V beforehand and tried to find support for his case with members of the royal court, the most influential being Margaret of Austria, the new Emperor’s aunt. Dürer would only stay two and a half weeks in Aachen, from October 6 until the 24th, before following the newly crowned Charles V to Cologne – where the latter would indeed re-instate the artist’s privilege – and then back to Antwerp, the main goal of Dürer’s long and exhausting trip. 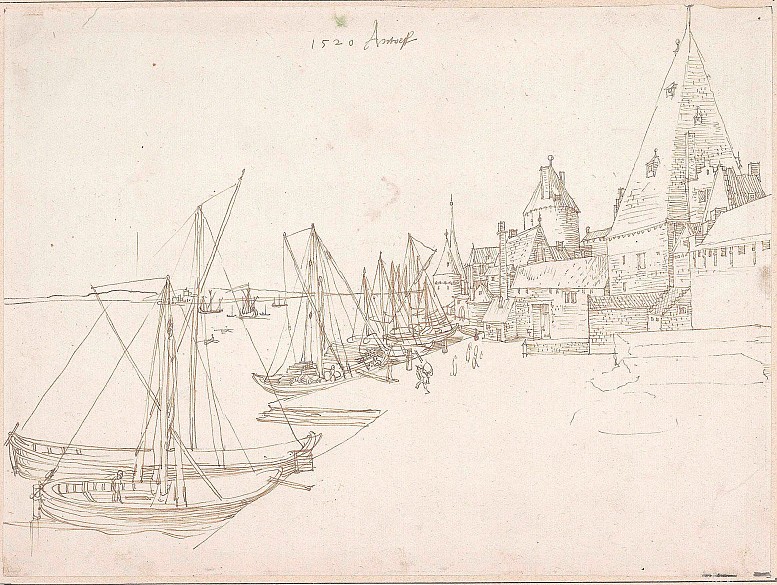 Anno 1520, Antwerp was the most dynamic and cosmopolitan town in Western Europe, at least from an economic point of view. It was a booming harbor and counted more than two hundred master painters, more than any other city in Europe. In addition, it had the biggest market for luxury goods, works of art among them. As is clear from the journal Dürer kept during this remarkable voyage, he connected especially with merchants, bankers and other potential clients, he tried to flatter by drawing or painting their portraits, no doubt in the hope they would grant him commissions.

Apart from that Dürer acted as a city-trip tourist; he travelled to touristic highlights, to cities such as Brussels, Mechelen, Ghent and Bruges, as well as ‘s-Hertogenbosch, Bergen op Zoom and Zeeland and wrote about remarkable events in those places, but especially in Antwerp, where he would remain the longest time. 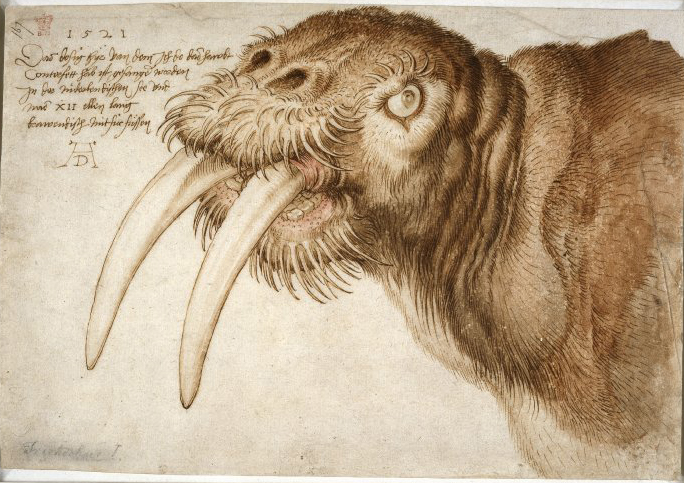 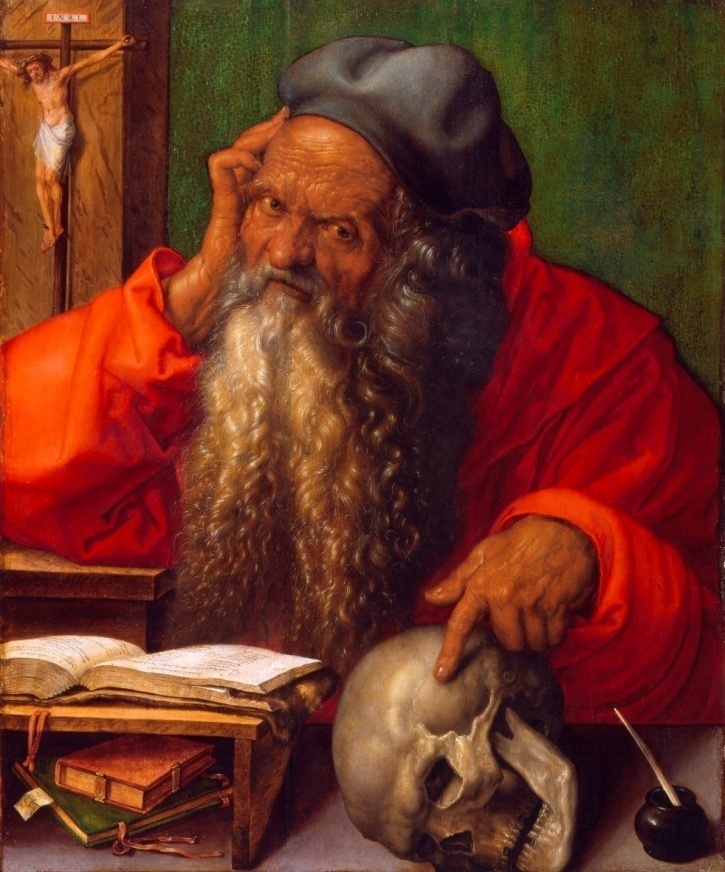 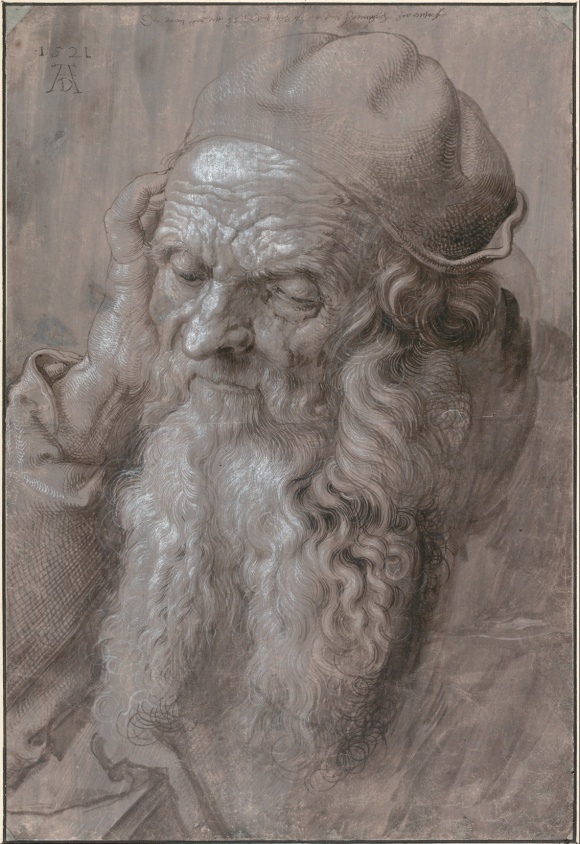 Albrecht Dürer, St. Jerome, 1521, Museu de Arte antiga, Lisbon
Albrecht Dürer, Head of a 93-Year Old Man, brush, 1521, Albertina, Vienna
Not only did Dürer keep a diary annex financial notebook, he would produce an enormous amount of drawings, in charcoal, silverpoint and pen, of landscapes, portraits and animals alike, but studies for larger projects as well, such as the painting of Saint Jerome in his study for Rodrigo d’Almada, now in Lisbon, which would end up as Dürer’s most often copied painting. 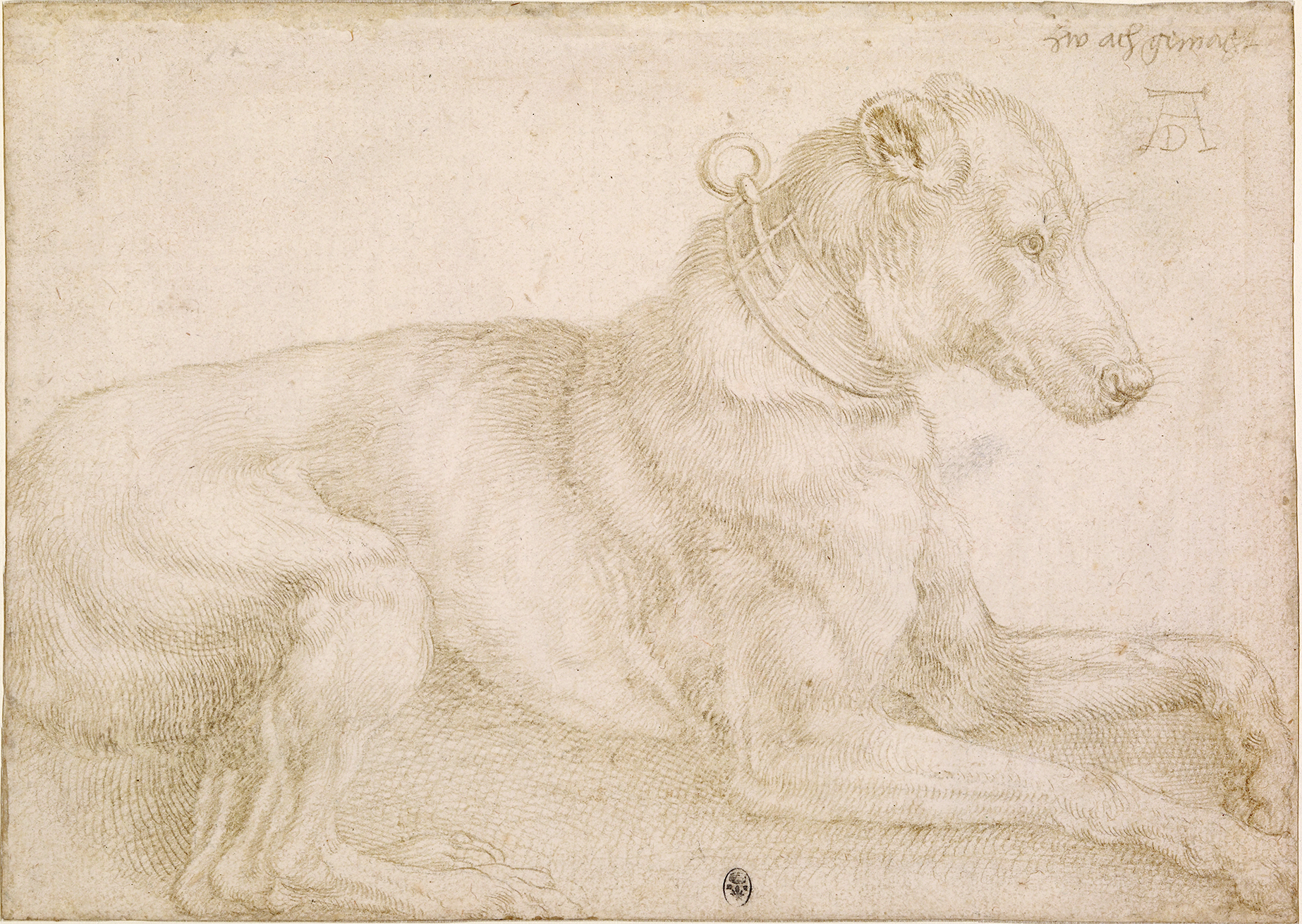 Especially the silver point drawings Dürer produced are a feast for the eye. They were part of a sketchbook he must have bought shortly before arriving in Aachen, since the earliest silverpoint drawings from that book were produced in Aachen, such as the grandiose drawing of a lying dog (London) or the double portrait of the two Nuremberg council members Paul Topler and Martin Pfinzing (Berlin). 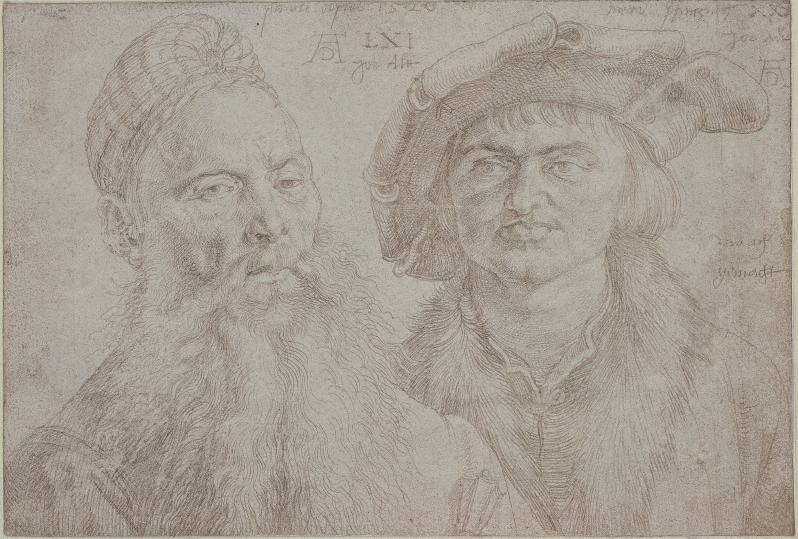 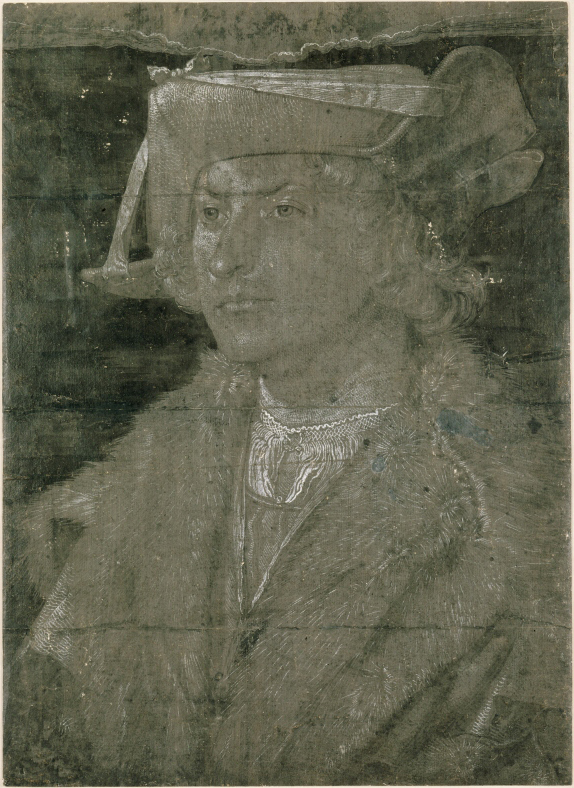 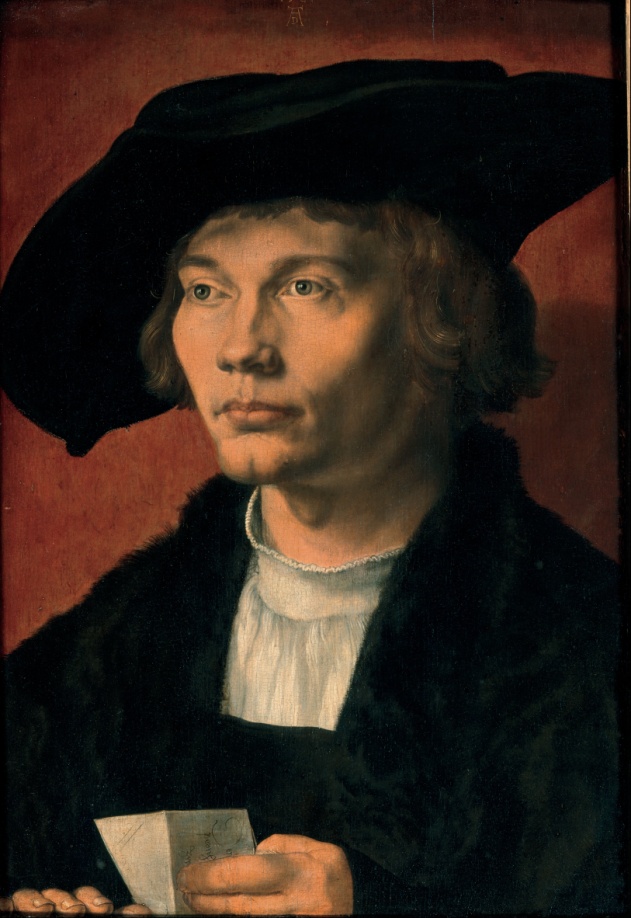 He made portraits of his clients, such as the already mentioned Rodrigo Fernandez de Almada (Berlin) or Bernard von Reesen (Dresden), but of several of his fellow painters, such as Bernard van Orley (Paris), Lucas van Leyden (Lille) and Joachim Patinir, as well, although he would never mention any of their works of art he no doubt must have seen. 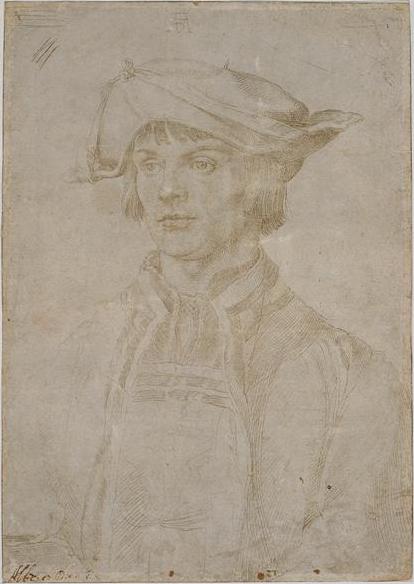 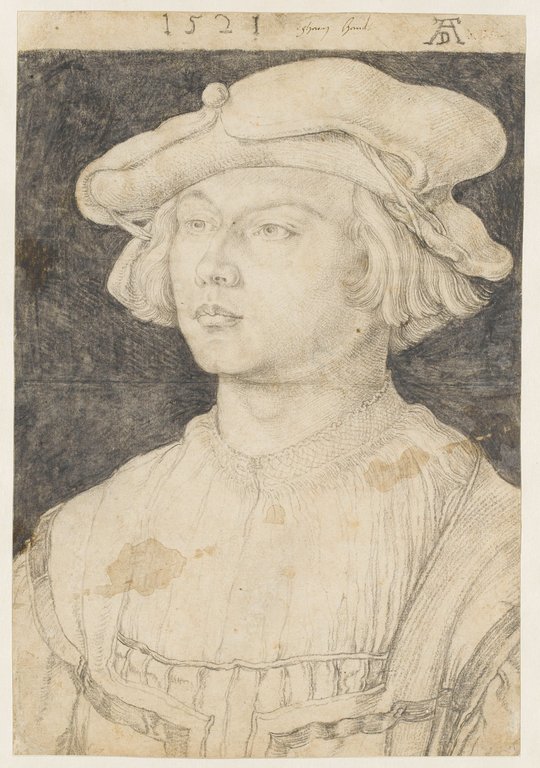 The Royal Museum of Fine Arts in Antwerp and the Suermondt-Ludwig Museum in Aachen are planning an important exhibition in 2020-21 to commemorate this remarkable journey of a highly intriguing artist. Both museums will try to build this exhibition around the many works of art that Albrecht Dürer produced during this one-year period. In the first place we will try to get together a large part of the more than a hundred and thirty drawings from the years 1520-21 we still know today, in the Albertina in Vienna, the Berlin print room, the Louvre in Paris, the British Museum in London and the Germanisches Nationalmuseum in Nuremberg, but from many other collections as well. Apart from his superb output on paper both museums will try to gather all the paintings he produced and are still among us, as well as those works of art he took with him from Nuremberg to sell to clients in Antwerp and beyond, or presents for potential clients that held a large market value.

Finally, a choice of paintings, drawings and prints from other artists will be made, artists he had met during his journey and whose work he must have seen, works that were produced at the time he was in the Netherlands, or works of art with a public function he could admire in town halls and churches alike, especially in Antwerp and Brussels. Because Albrecht Dürer’s work had a major impact on other artists, especially in Antwerp, it serves an important purpose to have those works present in the exhibition, whether they were made by Joos van Cleve, Dirk Vellert, Bernard van Orley or others. 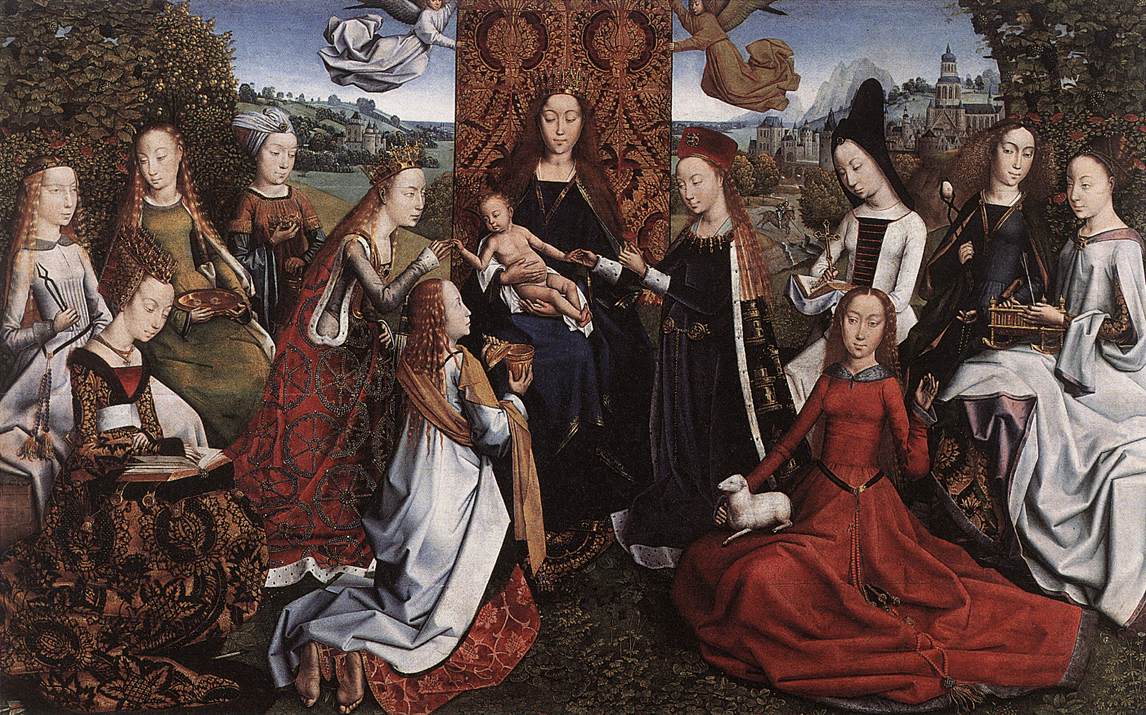 However, it would be rather useful to look for possible sources that may have inspired Albrecht Dürer himself, such as the Sacra Conversazione of the Master of the Legend of Saint Lucia, now in Brussels, but which he must have seen during his visit to Bruges, in Our Lady’s Church.

All these works of art should be displayed with the aid of Dürer’s notebook, which now only exists in the form of two later copies in Bamberg and Nuremberg and his artistic legacy (e.g. the drawings) alike.

For the purpose of the exhibition and the catalogue a scientifical board has been installed, with directors and curators of both museums as well as renowned specialists on the subject, such as Joris van Grieken, Jan van der Stock, Christof Metzger, Giulia Bartrum, Arnold Nesselrath, Thomas Schauerte, Till-Holger Borchert and Dagmar Eichberger. This board will refine the concept of the exhibition, its list of loans and the content of the scientifical catalogue that will accompany the exhibition, which will start in Aachen on October 7th 2020, exactly 500 years after Albrecht Dürer set foot in the town of Charlemagne, followed in February by the venue in Antwerp.

At present, several important drawings collections, such as the Louvre, British Museum, Berlin Print room, the Albertina, the Metropolitan Museum of Art and several others have agreed to reserve all drawings that essential for the success of the exhibition. Others will hopefully follow suit.