CODART´s nineteenth annual congress opened tonight with a festive reception at Museo Lázaro Galdiano in Madrid. During the next two days almost 140 members of CODART will attend lectures and excursions in Madrid. The theme of this year’s congress is Connoisseurship: Between Intuition and Science.

During the opening reception, offered by the Royal Netherlands Embassy in Madrid, the participants were welcomed by Elena Hernando, Director of Museo Lázaro Galdiano and Matthijs van Bonzel, the Dutch Ambassador. The opening was preceded by an optional visit to Palacio Real de La Granja de San Ildefonso and a private visit to Museo Lázaro Galdiano, which included an optional attribution session.

Tomorrow Museo Nacional del Prado will host the first day of the congress featuring several lectures, statements on the congress theme, discussions and an exclusive viewing of Bosch. The Centenary Exhibition before opening hours. The keynote lecture will be given by Christopher Brown, director emeritus of the Ashmolean Museum, Oxford.

On Tuesday the group moves to Museo Thyssen-Bornemisza for a private visit to Caravaggio and the Painters of the North with Gert Jan van der Sman, curator of the exhibition. During the morning program several curators will present short presentations on current issues in the Speakers’ Corner. Afterwards the congress participants may join various in-depth visits to museums and monasteries such as the Prado, Thyssen-Bornemisza, Monasterio de las Descalzas Reales, and El Escorial.

For the program of CODART NEGENTIEN, please see the congress pages. 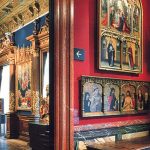