The Nationalmuseum has acquired a large, masterfully executed game still life dating from 1684 by Jan Weenix. The painting represents dead game placed next to a sculpted fountain in the shape of a putto. The canvas formerly belonged to the Swedish diplomat and collector Karl Bergsten and has now been reunited with those parts of his extensive art collection previously in the museum’s holdings.

Still life with a dead swan

Already in his early game pieces such as this large and ambitious painting, signed and dated 1684, Weenix shows the full command of a master. Exquisitely painted and observed, the picture evokes the image of an idyllic park landscape with a strolling amorous couple and an exotic harbor scene in the distance. The central motif combines meticulously rendered animal trophies (a swan, a peacock, small birds, a hare) and hunting gear (a gun, a pouch, a hunting horn), decoratively arranged at the base of a sculpted fountain. A longhaired black-and-white hunting dog seated on the fountain-base is shown suddenly distracted by a dove beating its wings, which adds a lively note to the composition. Like his cousin Melchior d’Hondecoeter, Weenix became famous for rendering the textural and coloristic beauty of his subjects. A characteristic of his work is his inimitable application of paint in rendering different textures such as an animal’s pelt or plumage. Here the various textures of the birds’ rich plumage are skillfully reproduced in nuances ranging from a soft and shimmering silky white to a hard metallic blue. The predominantly subdued colors of the surrounding landscape and the soft evening light impart warmth and luminosity to the still life’s more saturated colors.

The painting comes from the art collection of the Swedish businessman and Consul General Karl Bergsten (1869-1953), housed in the Villa Dagmar in Stockholm. Its acquisition by the museum was made possible by generous donations from the Axel and Nora Lundgren Fund and the Wiros Fund. Nationalmuseum has no budget of its own for new acquisitions, but relies on gifting and financial support from private funds and foundations to enhance its collections of fine art and craft. 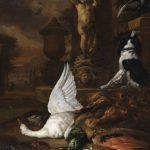 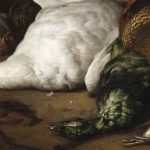