The Ashmolean opened a historic display of Rembrandt’s four earliest paintings, reuniting them for the first time in public. Hearing, Touch, Smell and Sight are the four surviving panels from Rembrandt’s Five Senses series, created around 1624−25. The display of the four paintings has been made possible through the generosity of the Leiden Collection, New York, a private collection assembled by Thomas S. Kaplan and Daphne Recanati Kaplan which has lent Hearing, Touch and Smell; and Museum de Lakenhal, Leiden which has lent Sight. The whereabouts of the fifth panel, which would depict Taste, is currently unknown and an empty frame in the exhibition space invites visitors to imagine how the missing painting might have looked.

A year ago only three of the four panels were known and the Ashmolean’s display follows the ‘sensational’ rediscovery of the Unconscious Patient (Allegory of Smell) in 2015. The latter was found in the basement of a house in New Jersey and was offered at auction as a minor nineteenth-century painting at an estimate of $500–$800. Two eagle-eyed experts in European auction houses suspected that the picture was an early Rembrandt and the bidding war resulted in a hammer price of $870,000. The painting was subsequently purchased by the Leiden Collection, New York, and the attribution to Rembrandt was immediately confirmed by the presence of the artist’s monogram – ‘RHF’ – standing for ‘Rembrandt Harmenszoon Fecit’. This newly discovered panel – with the artist’s earliest known signature – was unveiled to the public and worldwide press at the TEFAF art fair in Maastricht earlier this year. The Ashmolean’s display reunites this new discovery with Sight, Hearing and Touch for the first time.

‘The Five Senses’ were popular allegorical themes in the art of the Low Countries. Early treatments of the subjects often represented one of the senses with a female figure – an elegant woman holding a flower would symbolize ‘Smell’ for instance. Gradually the senses were interpreted in a more moralizing fashion and from the seventeenth century onwards the subject was shown in genre scenes of debauched peasants: amorous couples embracing might represent ‘Touch’ or a scene of drunkenness would show ‘Taste’. Rembrandt’s series clearly belongs to this later type, each painting featuring three half-length figures in a constricted space engaged in an activity representing the sense.

According to CODART member An Van Camp, Curator of Northern European Art at the Ashmolean, “these earliest of paintings by Rembrandt are fascinating in what they tell us of the young artist’s abilities and his precociousness. The paintings show that at the age of just eighteen, Rembrandt already has a genius for representing human character and emotion, and for packing in amazing amounts of detail into the briefest of brushstrokes – skills that would see him become one of the most celebrated artists of all time.”

The display will travel to the Rembrandthuis, Amsterdam to be shown from 1 December 2016 onwards. 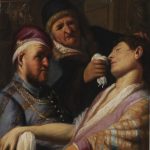 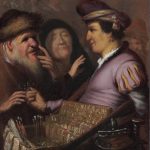 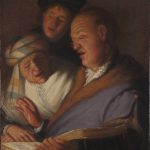 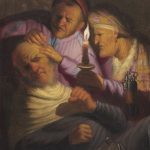