Nationalmuseum has acquired three important Flemish and Dutch cabinet paintings from the collection of Count Gustaf Adolf Sparre – a landscape by Gijsbrecht Leytens and two genre scenes in smaller format by David Teniers the Younger and Jacob Toorenvliet. The paintings have gilt frames decorated in Gustavian style, with the two latter works bearing cartouches at the top.

Gustaf Adolf Sparre af Söfdeborg (1746–1794) was heir to one of Sweden’s wealthiest merchant families. His large collection was built up primarily through extensive purchases in the Netherlands and Paris during the later 18th century and was considered one of the best in Sweden after the Royal collection itself. Sparre’s tastes as an art collector were formed during his Grand Tour of England, Holland and Belgium, as well as longer stays in Paris, during the years 1768–1772 and 1779–1780. The majority of the collection comprised small-scale Flemish and Dutch cabinet paintings from the 17th century. During Sparre’s lifetime, the collection was displayed in the gallery that he had set up in an apartment of the Sahlgren Palace on Norra Hamngatan in Gothenburg. In around 1775, Sparre commissioned frames for the paintings to match the rest of the gallery’s décor. These were probably made by the same joiners, including sculptor G. J. Fast, who created the apartment’s mirror frames and panelling.

Sparre was particularly keen on Dutch and Flemish genre painting, from the simple depictions of drinking and smoking peasants to the richly detailed “fine painting” of the Leiden artists. This was entirely in line with prevailing trends among 18th-century connoisseurs in the Netherlands and Paris where, as graphic reproductions, the works of the Dutch and Flemish artists were widely appreciated. The newly acquired paintings Tavern Interior with Peasant Lighting his Pipe from the 1640s by Antwerp painter David Teniers the Younger (1610–1690) – the artist with the largest number of works in Sparre’s collection – and Man Holding a Jug (Taste) from around 1679 by the Dutch “fine painter” Jacob Toorenvliet (1640–1719) are prime examples of the tastes of the time.

Another important group in the Sparre collection was landscapes and pastoral scenes. Wooded Mountain Landscape with Waterfall and Travellers is a magnificent fantasy landscape in the Flemish tradition, painted in the first half of the 17th century by the Antwerp painter Gijsbrecht Leytens (1586–c.1642/56), best known for his atmospheric winter scenes. With its characteristic features – an imposing Northern European mountain- and forest landscape combined with fanciful Italianate buildings, pastoral idylls and exotically dressed groups of travellers – the painting is representative of key trends in Flemish landscape painting after the year 1600.

Nationalmuseum’s acquisition, which was made possible by a donation from the Wiros Fund, forms an important addition to its collection of 17th-century cabinet paintings. At the same time, it provides an insight into patterns of private art collecting in 18th century Europe. 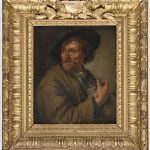 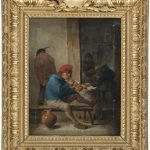 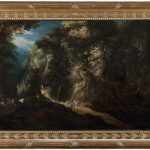