Shopping center Magna Plaza in Amsterdam, just behind the Royal Palace has opened a permanent exposition in its basement with reproductions of all paintings by Rembrandt. All 325 paintings, that are genuine according to Ernst van de Wetering that is. The head of the Rembrandt Research Project is responsible for the content of the exhibition. The reproductions are shown without a frame, close to each other, like a “full-size photo book”

Some of the works that have been damaged in the past have been "restored" digitally. The Nightwatch has regained its lost strips by supplementing parts of Lundens’s copy to it. Another is the Danae that has been restored to the conditions prior to the infamous acid attack on the painting in 1985.

Some controversy around the exhibition has arisen as some are concerned with the one-man selection of what is the complete oeuvre of the artist and others claim that reproductions can never even remotely substitute the originals. The former concern is brushed aside by Van der Wetering in the NOS interview below. When asked about those who doubt the set oeuvre of 325 paintings he responds: "Well they have no eyes then".

Amsterdam debate center De Balie organizes a debate on the second controversy on 8 January. Ernst van de Wetering will debate with, among others, Rudi Fuchs and Ralph Keuning on the value of originals and the increasing appearance of exhibitions of reproductions. 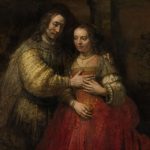