Historian Janelle Moerman has worked for years for Dutch public broadcasting. afterwards she worked for Duivenvoorde castle in Voorschoten.
Peter van der Ploeg is an art historian specialized in the 17th century. He has been chief curator in the Mauritshuis for years before he moved to Waanders publishers in 2008, one of CODARTs maecenases. We look forward to meeting Peter’s successor and continuing this fruitful cooperation.

The greatest treasure of Huygensmuseum Hofwijck is its building, one of the most important monuments of the 17th century. Additionally the museum holds portraits (painted, drawn and printed) of Constantijn and Christiaan Huygens and their family, original manuscripts mainly by Constantijn and views on Hofwijck’s building and gardens. The museum also holds an extensive library with early modern books, among which are copies from Constantijn’s original library. 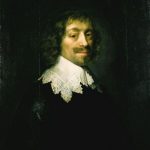