It was Catharine the Great who, according to contemporary taste in palatial decoration, desired all the paintings in the Hermitage to be framed in uniform gilded and heavily decorated frames. The Dutch paintings were no exception, they were all stripped from their original black, more sober frames. Of those original frames nothing remains. The gilded frames did not fit well with the paintings and also the Russian black frames that were made at the beginning of this century are no good match with them.

For that reason Dutch framemaker and CODART patron Gregor’s Framing was given the prestigious commission to reframe more then 20 paintings in the State Hermitage Museum, among them works by Rembrandt. The new frames were made (crafted) according to the traditional XVII century Dutch methods in the unique frame-making studio, which is situated in Spankeren in the Netherlands. As a result, the paintings can be viewed in more fitting, historically more accurate conditions, for the first time in over 200 years.

From 9 December 2011 to 15 January 2012, the State Hermitage Museum will host an exhibition highlighting the new frames. Some 20 paintings are shown in their new frames, with explanatory displays on the history and manufacturing process of the frames. A digital version of the displays can be downloaded here (pdf). Also a movie on the process of the reframing is shown. You can see this below. The project was made possible with support of the Wilhelmina E. Jansen Fund and the Foundation Hermitage Friends in the Netherlands. 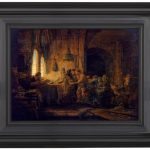