On Thursday at Sotheby’s in New York, the Cleveland Museum of Art is putting 32 old-master paintings up for auction, and the J. Paul Getty Museum is offering 15. In the meantime the Pennsylvania Museum of Fine Arts and the Carnegie Museum of Art are selling five paintings each, and the Art Institute of Chicago is selling two Picassos, a Matisse and a Braque at Christie’s in London. Last week the New Jersey Historical Society sold 17 items at Christie’s in New York, including a 120-piece dinner service used to entertain President Martin Van Buren that went for $17,000.

A few years ago sales like these were likely to have gone unnoticed. Yet deaccessioning — the art world term for selling pieces from a museum’s collection — has become a dirty word and the focus of increasingly intense attention. Cultural institutions like the National Academy Museum and the Rose Art Museum at Brandeis University have generated controversy by selling or even considering selling items to cover operating costs, a practice forbidden by the professional association for art museum directors. 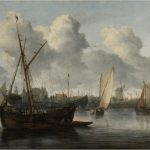