The Frans Hals Museum has acquired a painting by Salomon de Bray at auction in New York (Sotheby’s). The museum’s collection only counted one painting by the important painter and architect from Haarlem. The Queen of Sheba before the Temple of Solomon in Jerusalem dated 1657 has been acquired with support from the Vereniging Rembrandt, the Mondriaan foundation and the BankGiro lottery. It will be on view in the museum this spring.

Salomon de Bray (1597-1664) was an influential architect, designer, painter, writer and poet. He published treatises on architecture, designed an addition to the Nieuwe Kerk in Haarlem and was one of the painters who decorated the Oranjezaal in Huis ten Bosch in The Hague.

The Queen of Sheba before the Temple of Solomon in Jerusalem is the best architectural piece by De Bray. It is exceptional in that it shows Solomon’s temple. This legendary building was seen as the penultimate ideal architecture. 17th-century architects actively tried to reconstruct the ideal proportions of the temple. In this painting De Bray shows his interpretation. 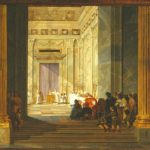