The Mauritshuis announces a stop on loans during the renovation and expansion of the museum. Requests for loans for exhibitions to be held in the period from 2011 until the end of 2014 should be submitted as soon as possible, and no later than 30 April 2011. This also applies to the paintings in the Prince William V Gallery, which is administered by the Mauritshuis.

In the spring of 2012 the Mauritshuis will commence the museum’s expansion to the building across the road, known as Plein 26. An underground foyer will connect the Dutch Classicist city palace to this Art Deco building, thereby doubling the museum’s surface area. Designed by the architect Hans van Heeswijk, the resulting building will suit the international status of the Mauritshuis. The facilities will be expanded with a new exhibition hall, an auditorium for lectures and conferences, and an educational area for children. The entrance will be through the front courtyard, lending the Mauritshuis an open and welcoming exterior. The museum shop and the café will be completely renewed. Light and clarity are leading concepts in the preliminary design (see  www.mauritshuisbouwt.nl/en). The city palace itself will undergo renovation while the expansion is taking place. The upgraded museum is expected to re-open to the public in 2014.

During the building period, the museum’s collection will be located elsewhere. A selection of masterpieces will remain on view in The Hague at a location that will be announced shortly. There are also plans to exhibit parts of the collection in a number of other museums. In addition, a travelling exhibition will tour Japan and the United States.

To ensure that we have enough time to carry out our plans in good order, we must ask you to submit all new loan requests for exhibitions to be held in the period from 2011 until the end of 2014 as soon as possible, and no later than 30 April 2011. This also applies to the paintings in the Prince William V Gallery, which is administered by the Mauritshuis. Unfortunately, we will not be able to consider any loan requests for the given period that are received after 30 April. Naturally, we will resume our usual loan policy from 2015 onwards.

We hope that you will appreciate our position. If you have any questions, please contact Quentin Buvelot, Senior Curator, at buvelot.q@mauritshuis.nl. 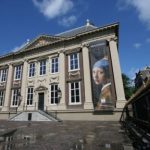