The famous Czartoryski family collection, one of Europe’s most important private art holdings has been purchased by the Polish government last Thursday for $105 million. The collection was owned by the Princes Czartoryski Foundation and is housed at the National Museum in the southern city of Krakow.

In order to enable the purchase by the state, the foundation had to change its statute, as the collection was otherwise “nontransferable and indivisible.” All of the foundation’s board members resigned in protest, the New York Times reports, when they were excluded from the talks regarding the purchase agreement.

The Czartoryski collection encompasses 593 paintings and 250,000 historic manuscripts and documents that the family amassed in order to preserve Polish culture and history. It was established in 1801 by Princess Izabela Czartoryska to preserve Polish and European works while her country was partitioned by neighbors Austria, Prussia and Russia.

The collection includes Rembrandt’s Landscape With the Good Samaritan and is well known for Leonardo da Vinci’s Lady With an Ermine. In addition it has drawings by, among others, Gerard David, Martin de Vos, Pieter Stevens and a gouache by Hans Bol. Among the prints are series by Hieronymus Cock after Pieter Brueghel the Elder, Hendrick Goltzius and Rembrandt.

Piotr Glinski, the deputy prime minister and minister of culture who signed the agreement, to buy the collection, said that his main intention was to ensure that the artworks receive proper care and never leave Poland. Earlier this month, he said that was a possibility as long as they belonged to the privately owned Princes Czartoryski Foundation.

Mr. Glinski acknowledged that the $105 million that the government paid for the collection is “way below the market price,” which is widely estimated at more than $2 billion. He said the transaction can be viewed more as a “donation.”

The decision changes only the status of the collection, which was set up more than 200 years ago by Princess Izabela Czartoryska. The artworks will remain where they are today. Most are housed and displayed in the National Museum in Krakow, in southern Poland, with the exception of “Lady With an Ermine,” which is on display at the Wawel Royal Castle in Krakow.

During the war years, many objects from the collection were looted, including Raphael’s masterpiece “Portrait of a Young Man” (1513-14), and were never retrieved. The list of losses includes about 800 works. The agreement signed at the Royal Castle in Warsaw on Thursday not only gives Poland the rights to the current collection, but also transfers the rights to any future claims to works of art that may be retrieved. 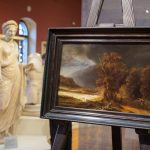