Information from CODART member and Curator of 17th- and 18th-century Dutch and Flemish paintings at the Louvre, Blaise Ducos

A Belgian collector is lending to the Louvre a painting by Anthony van Dyck (1599-1641). This is a portrait of Everhard Jabach (1618-1695), a Finanzmann from Cologne who took residence in Paris and became a French denizen. Jabach built a glorious collection of Renaissance and 17th century masters. His role in the shaping of France’s cultural patrimony cannot be overestimated. By selling most of his art possessions to Louis XIV (1671), Jabach let the kingdom become the owner of numerous drawings and paintings by Leonardo da Vinci, Holbein, Titian, Mor, Pontormo, Corregio, Bronzino, Veronese, Blanchard, Valentin, Claude Lorrain, Paul Bril, Steenwijck, Van Dyck himself…, propelling the royal collections into a whole new phase. The list of works bought by the king of France conveys at once the scale of Jabach’s activity and the breadth of his European reputation. Today, these works still form the core of the Louvre holdings.

Jabach and Van Dyck met in London in 1636-1637, and the portrait now to be seen in the Louvre bears testimony to the amicable relationship between the two. A very young man at the time (he was eighteen years old), Jabach was already a connoisseur and collector, and used to travelling abroad. The intimate tone of the picture, the high style demeanor of the sitter and, to say the least, the magnificent yet muffled sheen of the costume give the canvas a distinctive quality, when compared with the more typical, stately, and probably later executed portrait of Jabach, also by Van Dyck, now in the Hermitage. Jabach before Jabach…

The Louvre is most thankful to the owner of the picture for his generosity. 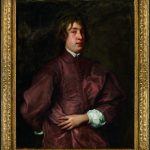